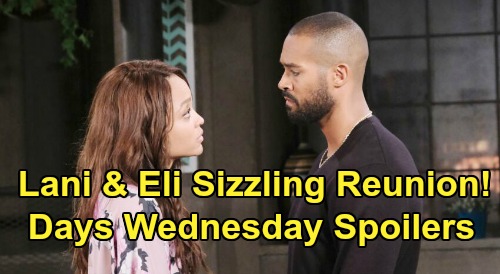 Days of Our Lives (DOOL) spoilers for Wednesday, February 26, tease that Sonny Kiriakis (Freddie Smith) will unleash his fury. He just walked in on Victor Kiriakis (John Aniston) insisting no one has to know Maggie Kiriakis (Suzanne Rogers) really killed Adrienne Kiriakis (Judi Evans). Victor and Xander Kiriakis (Paul Telfer) may try to hide the truth, but it’s futile at this point. The jig is up!

DOOL fans can expect Sonny to explode in Wednesday’s episode. He’ll fly into a rage over the cover-up, so Victor and Xander will certainly face their fair share of criticism. However, Days spoilers say Sonny will save the worst of his wrath for Maggie. She’ll confess to killing Sonny’s mother before he blasts her for getting behind the wheel and driving drunk.

Meanwhile, Lani Price (Sal Stowers) and Eli Grant (Lamon Archey) will talk through their issues. Of course, they won’t keep talking for long! Eli and Lani are still madly in love, so they’ll ultimately settle on reuniting and enjoy some steaminess. “Elani” fans will definitely want to stay tuned for some sizzling scenes.

Other Days of Our Lives spoilers say Justin Kiriakis (Wally Kurth) is in for a shock. He’ll be taken aback when Stefano DiMera aka Steve Johnson shows up at his door.

Justin will naturally demand answers about Kayla Brady (Mary Beth Evans), who he’s been worried about ever since she went missing. He’ll call for Kayla’s safe and immediate return, but Stefano will have other plans.

Naturally, Justin won’t be keen on negotiating, so expect some tense moments. Things will get complicated, but Stefano will demand a hostage trade by the time Friday rolls around. He’s still obsessed with Marlena Evans (Deidre Hall), so expect Stefano to keep fighting for what he wants.

Over with Chad DiMera (Billy Flynn), he’ll take the opportunity to gloat. Days spoilers say Chad will announce that Gabi Hernandez (Camila Banus) has been fired from DiMera Enteprises.

Whether Gabi’s free by then or still in lockup, Chad will happily rub this news in her face. He’ll take great pleasure in delivering updates that add to Gabi’s suffering.