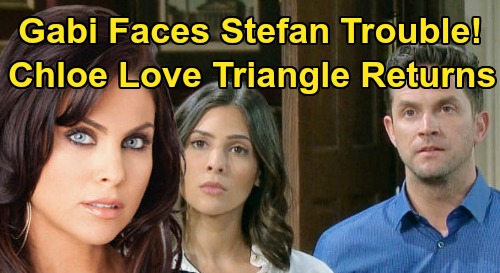 Days of Our Lives (DOOL) spoilers tease that Stefan DiMera (Brandon Barash) is headed back to the NBC soap soon. It was a big mistake to kill off Stefan and snuff out “Stabi,” but DOOL’s thankfully correcting their blunder. Stefan will make his return around April, so that should kick off a reunion story with Gabi Hernandez (Camila Banus).

Of course, it could take some time for things to get going again. Stefan may have amnesia, which has been the case for many back-from-the-dead characters. However, you can bet Gabi will fight for her true love and will hopefully win Stefan back in the end. “Stabi” fans are certainly counting on these two to reunite!

Even so, there are still some Stefan and Chloe Lane (Nadia Bjorlin) shippers out there. They feel like Chloe and Stefan’s love story was never given a fair shake. Days of Our Lives spoilers reveal that Chloe is back on contract and will resume filming in March. Once Chloe makes her next on-air appearance later this year, what will the future hold?

Since trustworthy insiders insist Jay Kenneth Johnson is also reprising his role as Philip Kiriakis, another round of Chloe and Philip would be logical. Still, Chloe would have other options – and one of them would be Stefan. It might be worth revisiting this “Stoe” and “Stabi” love triangle, even if it mainly served as some angst for Stefan and Gabi.

Days viewers know Gabi’s relationship with Stefan was complicated at times. They’re both passionate people who’ll do anything to get what they want, so they occasionally brought out the worst in each other. There was definitely a lot of love between them in the end, but it was a long road to get there.

Stefan and Gabi’s time together was ultimately cut short, so we never saw them tackle a ton of challenges. This could be their chance, especially if Days throws Chloe in the mix again. Perhaps Gabi will have some competition for Stefan’s heart. There’s no way DOOL will let Gabi and Stefan get by without a few fights along the way. They’re at their best when they’re sparring and then making up!

It’ll interesting to see what the future holds for Gabi, Stefan and Chloe. Days of Our Lives spoilers, updates and news say some excitement’s ahead no matter what, so stay tuned.

Are you rooting for Gabi to recapture the love she lost with Stefan? Would you consider giving Stefan and Chloe another try? We’ll keep you posted on all the latest DOOL news and updates. Stop by CDL often for hot Days of Our Lives spoilers.