BY hellodrdavis on July 27, 2019 | Comments: one comment
Related : Days of Our Lives, Soap Opera, Spoiler, Television 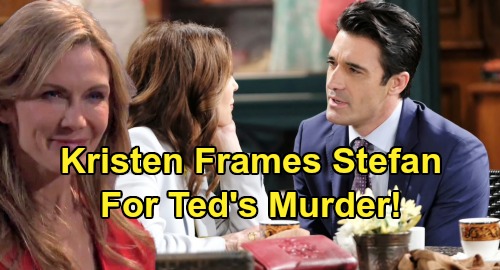 Days of Our Lives (DOOL) spoilers tease that things are going to go downhill for Stefan DiMera (Brandon Barash) very soon. It’s bad enough that he’s been falsely accused of kidnapping Ted Laurent (Gilles Marini) and Kate DiMera (Lauren Koslow) and has been stripped of his CEO position at DiMera Enterprises. Ted and Kate aren’t budging from their story that he was behind their kidnapping, since they’re afraid of Kristen DiMera’s (Stacy Haiduk) wrath.

According to DOOL spoilers, Stefan will scramble to protect his company from outside influences. He and Gabi Hernandez (Camila Banus) strongly suspect that Nicole Walker (Arianne Zucker), who’s really Kristen, is trying to gain control over DiMera Enterprises, but right now they have no idea why. They just know that Nicole poses a threat, and soon their suspicions will be confirmed.

They’ll be flabbergasted when “Nicole” ends up bringing Tony DiMera (Thaao Penghlis) back. She’ll not only reveal that Tony’s alive, which will be a stunning development in its own right, but she’ll also reveal that she’s marrying him and becoming a DiMera by marriage…which will make her eligible to become CEO. Look for a big battle between “Nicole” and Gabi, as both vie for the CEO position, each having become a DiMera by marriage.

But this won’t even be the start of Stefan’s problems. According to Days of Our Lives spoilers, Ted will decide to do some digging during the week of August 5, 2019. It looks like he’ll stumble across Tony and Kristen, and he’ll end up confronting them. From there, things don’t look so good for Ted, since DOOL spoilers say that tragedy will strike. He may threaten to expose Kristen’s big scheme, and that will likely be the end of Ted!

Well, shortly after the tragedy with Ted, DOOL spoilers say that Stefan will be arrested for murder. He’ll most likely be framed for Ted’s murder by Kristen, as this would be the ultimate way for her to eliminate her little brother from having any access to DiMera Enterprises going forward…after all, Mr. Shin (Michael Hagiwara) from the board won’t want to have an accused murderer anywhere near the company!

Of course, once Stefan gets arrested for murder, Gabi is going to have a big decision on her hands. She’s been working all along in order to eventually undermine him, but at the point when he’s arrested, he’ll be married to Gabi. It will be interesting to see whether she decides at that point to support her husband or let him hang out to dry!

At any rate, it certainly looks like Stefan’s in for a difficult road ahead, as he tries to defend himself against murder charges! Do you think Gabi will still support him then? Stay tuned to DOOL and don’t forget to check CDL often for the latest Days of Our Lives spoilers, updates, and news.