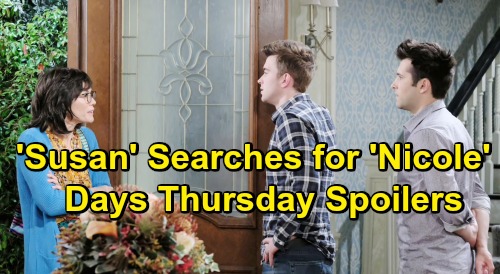 Days of Our Lives (DOOL) spoilers for Thursday, July 18, tease that Will Horton (Chandler Massey) and Sonny Kiriakis (Freddie Smith) will be stunned to find “Susan Banks” (Stacy Haiduk) at the front door of the Kiriakis mansion. As DOOL viewers know, this isn’t the real Susan, but rather Kristen DiMera (Stacy Haiduk) in disguise as Susan.

Of course, Kristen has a very good reason for turning up as Susan right about now – Xander Kiriakis (Paul Telfer) swiped Kristen’s mask that made her look like Nicole Walker (Arianne Zucker). It’s likely that Kristen has turned up at the Kiriakis mansion to try to reclaim the “Nicole” mask so she can get back to the business of trying to seduce Brady Black (Eric Martsolf) as Nicole and take over DiMera from Stefan DiMera (Brandon Barash).

According to DOOL spoilers, Xander and Kristen will embark on a game of cat and mouse. It should be interesting to watch Kristen (as Susan) bumble around the mansion and try to locate her “Nicole” mask, while fending off the attention of Will and Sonny. And watch out if “Susan” runs into Xander, as he’ll surely know that he’s dealing with Kristen in a Susan get-up.

Next, on the new episode of Days of Our Lives on Thursday, July 18, Ted Laurent (Gilles Marini) and Hope Brady (Kristian Alfonso) will spend some quality time together. Hope seems to be on the verge of giving a relationship with Ted a chance, but of course she has no idea that he’s completely lying to her about his involvement with Xander, his knowledge about Holly Jonas’ (Harlow and Scarlett Mallory) death, and his recent kidnapping.

As DOOL viewers know, both Ted and Kate DiMera (Lauren Koslow) have been threatened by Kristen to keep their mouths shut about who really kidnapped them. They’ve both falsely implicated Stefan in their kidnapping, and for now Hope is buying their story. She seems to really trust Ted, and on Thursday’s episode the two will even share a kiss.

Finally, on Thursday’s new episode of DOOL, Jennifer Horton (Melissa Reeves) will reach a big decision. She’s been doing her best for months to try to get Jack Deveraux (Matthew Ashford) to come around and at least try to be the stand-up guy that he used to be, before he “died.” But Jack just hasn’t been willing to entertain Jennifer’s pleas, and she’ll decide that it’s time to move on from Jack.

After all, there’s only so much pushing and arguing that she can do with the guy. She’ll apparently figure that if Jack really wants nothing to do with her or their children, then she should give up. Perhaps she’ll see that she deserves an enjoyable social life, and she can’t have that while constantly arguing with Jack.

Ongoing DOOL spoilers indicate that Jennifer will soon seek out the company of Dr. Henry Shah (Andre Khabbazi) as a way of formally moving on with her life. Henry was quite smitten with Jennifer in the past, and Jen will be hoping that he’ll give her another chance – and this will probably be a good move for Jennifer.

It sounds like a lot of DOOL drama is heating up for Thursday’s episode, so stay tuned! We’ll give you updates as DOOL news comes in. Stick with the NBC soap and don’t forget to check CDL often for the latest Days of Our Lives spoilers, updates, and news.