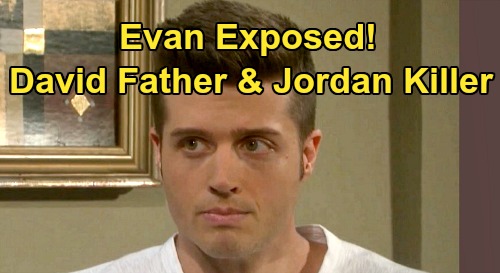 Days of Our Lives (DOOL) spoilers reveal Evan Frears (Brock Kelly) is keeping some major secrets – and they’re sure to explode sooner or later! CDL previously predicted that Evan would turn out to be David Ridgeway’s (Caleb and Kyler Ends) father, and now reliable Days of Our Lives insiders insist that’s true. It also lines up perfectly with some recent clues that DOOL offered onscreen.

During a recent chat with Sonny Kiriakis (Freddie Smith), Evan reflected on how he wanted show David the kindness and stability he never had growing up. Sonny gushed about what a positive role model Evan was for David. He pointed out that David feels safe and loved before insisting Evan would be a great dad someday.

Next, Rafe Hernandez (Galen Gering) revealed he was moving forward with David’s adoption. The news clearly left Evan rattled. Although Evan tried to blame it on his interrupted kiss with Sonny, he was obviously just making excuses.

Evan couldn’t share the real reason he was so unsettled by Rafe adopting David. It must be because Evan is David’s dad and he doesn’t like the idea of Rafe taking that title. Of course, this stirs up questions about why Evan hasn’t revealed the truth.

Evan apparently sought out Rafe to apply for this job and become a nanny to his own son.

Why not just explain that he’s David’s father? Rafe would surely understand that Jordan Ridgeway (Chrishell Stause) was deeply disturbed and misguided. There must be some darkness in Evan’s history or perhaps something he’s running from.

Jordan repeatedly argued that David’s father was horrible and shouldn’t be allowed anywhere near him. That hasn’t proven to be the case so far. Evan has been a sweet and devoted nanny, but that doesn’t mean there aren’t dark struggles he’s overcome.

Jordan was crazy, so she may have had a twisted perception of who Evan was. Even so, Evan doesn’t quite seem to be the wholesome man Days is making him out to be. There’s more lurking underneath the surface, so Jordan may have been right on some level.

That brings us to another clue from that same conversation with Sonny. Evan surprised Sonny by admitting he had sympathy for Ben Weston (Robert Scott Wilson). He noted that he wasn’t condoning what Ben did, but Jordan was completely unhinged.

Evan felt like it was a relief that Jordan was out of the picture. He suggested that in some ways, Ben did his nephew a favor.

Why is Evan so eager to give Ben a pass? It’s possible Evan just believed Jordan would always keep him away from David and wouldn’t protect their son. He may think Ben eliminated a dangerous obstacle.

However, it’s also possible Evan was hiding the truth and speaking about himself. He may have killed Jordan and justified it as doing David a favor. As for Ben, he may have had to take the fall since Evan didn’t want to abandon David.

Ben was the easiest person to set up, so Evan may have done what he had to do – hence the sympathy for the wrongfully accused killer.