Days of Our Lives Spoilers: Stefano Comes Clean To Stunned Chad – Kristen On The Hotseat? 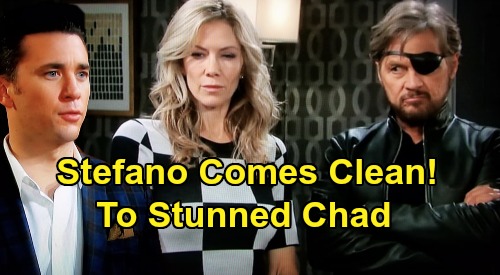 Days of Our Lives (DOOL) spoilers tease that Chad DiMera (Billy Flynn) will get fed up with all the secrecy. DOOL fans know Stefano DiMera aka “Steve Johnson” (Stephen Nichols) has denied Chad a face-to-face meeting. Chad just wants a chance to see his father and talk to him in person, so he can’t understand what the problem is.

Of course, Kristen DiMera (Stacy Haiduk) scored a face-to-face meeting, but that’s only because she doesn’t have the same moral code as Chad. Kristen may not be as ruthless as she used to be, but she’s ruthless when it counts! She’s also been the most loyal of Stefano’s children, so he knew he could count on her to keep quiet.

Stefano can’t reveal himself to Chad yet for obvious reasons. Days fans know he’s stolen Steve’s body – and although Steve’s mind is dormant at the moment, that was stolen, too. Stefano’s memories were implanted into Steve, so every part of Steve’s life was ripped away.

Steve is Abigail DiMera’s (Kate Mansi) uncle, so Stefano must know he’d be testing Chad’s loyalties if he came clean. He realizes Chad might put his conscience and Abigail above his family.

Time will tell if that’s true, but let’s focus on Chad’s growing frustration for now. He’ll decide to confront Kristen about her meeting with Stefano and express his outrage that she got one instead of him.

Days of Our Lives spoilers say Chad will also launch a grilling session. He’ll have plenty of questions about this meeting and why Stefano won’t reveal himself to anyone else.

Chad will naturally find that suspicious, so he’ll push Kristen to spill all. Since Stefano refuses to explain himself, Chad will urge Kristen to explain for him.

Kristen will really be on the hotseat as Chad keeps revving up the pressure. She may realize Chad’s not going to let this go – and she can only hold him off for so long.

Kristen might tell Stefano to figure something out or else Chad’s going to blow everything. It’d be better for Stefano to confess and at least try to get through to his son. Chad will definitely want a meeting NOW; he’ll be sick of waiting around!

Days of Our Lives spoilers say Chad and Abigail will make a stunning discovery during the week of January 27-31. Will that involve a major Stefano clue? Will Stefano decide to come clean to Chad soon?