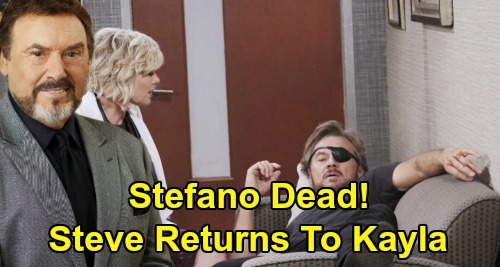 Days of Our Lives (DOOL) spoilers tease that there’s good news for “Stayla” fans but bad news for those that love Stefano DiMera who is about to die shortly. DOOL viewers know Steve Johnson (Stephen Nichols) isn’t quite himself at the moment. As Stefano DiMera has explained, his “essence” or consciousness was put into Steve’s mind and body. Steve has all Stefano’s memories and none of his own.

In other words, Steve is fully dormant right now. It’s almost like Steve’s in a coma since he has no idea what’s going on. Steve’s body may be up walking around and doing all sorts of horrible things, but none of this is his fault.

This is all on Stefano, Dr. Wilhelm Rolf (William Utay) and people like Kate Roberts (Lauren Koslow), who kept quiet for so long.

However, Stefano’s secret is spreading rapidly and will soon become public knowledge in Salem. What happens after Stefano’s exposed? Sooner or later, the real Steve will be brought to the surface.

That’ll undoubtedly put Kayla Brady (Mary Beth Evans) in a tight spot. She’s fallen for Justin Kiriakis (Wally Kurth), but that’s only because she thought Steve was a jerk who didn’t care about her anymore.

Can Kayla really resist Steve once he’s back to his old self? No way – at least not for long! Days of Our Lives spoilers point to a reunion eventually, so Justin will just have to accept it.

If Kayla and Justin were both being honest with each other, they would admit that they’ve both been on the rebound. This relationship was good for getting through a difficult time together, but that’s about the extent of it.

Days of Our Lives spoilers say Justin should understand that Steve and Kayla are meant to be. He may even step aside once he realizes exactly what was going on. Justin does care about Kayla and wants her to be happy.

Justin might argue that if Steve’s still in Kayla’s heart, then she should be with him. The truth is Justin would still be with Adrienne Kiriakis (Judi Evans) if he could.

In the meantime, Days fans will have to say goodbye to the great Stefano DiMera as it appears after this death the ‘Phoenix’ will rise from the ashes no more. It’ll be tough since this is likely the character’s forever death. Although this obviously wasn’t the real Stefano, it’s still sad to think all versions of him may disappear permanently.

On the bright side, at least Steve will be back to normal and can reunite with his family! We’ll give you updates as other Days news comes in. Stay tuned to DOOL and don’t forget to check CDL often or the latest Days of Our Lives spoilers, updates and news.