Days of Our Lives Spoilers: Stefano Shot For Real – Kayla Smuggles ‘Steve’ Out of Hospital 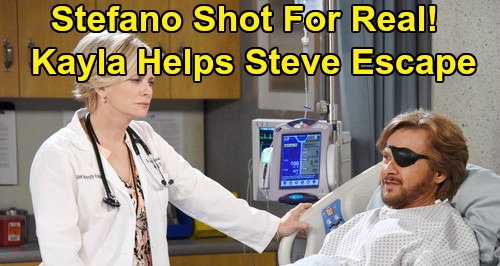 Days of Our Lives (DOOL) spoilers tease that Stefano DiMera aka “Steve Johnson” will find himself in a tricky situation. After danger erupts, Stefano will lose all control. He’s got several plots cooking, but he won’t expect to take a bullet!

DOOL fans know “Steve” was “murdered” by Dr. Wilhelm Rolf (William Utay) in a recent episode. He wanted John Black (Drake Hogestyn) to believe that Dr. Rolf actually shot and killed him, so they put on quite a show. However, “Steve” will be shot for real in an upcoming episode.

It also looks like “Steve” will either still be at risk thanks to an enemy or will perhaps face some legal woes. That’s because Kayla Brady (Mary Beth Evans) will land in a tight spot of her own.

Stefano knows there’s an unbreakable bond between Steve and Kayla. He’s done his best to shatter it, but it’s no use. There’s always going to be part of Kayla that cares about Steve.

Days of Our Lives spoilers say Stefano will use that to his advantage during the week of February 10-14. He’ll realize he can prey on Kayla’s emotions and convince her to help him.

Kayla will be torn between her head and her heart here. She prefers to remain professional and play by the rules, but still…this is “Steve.” She won’t be able to turn her back on “Steve” when he needs her most.

Days spoilers say Kayla will end up putting a risky plan in motion. At “Steve’s” request, Kayla will be on a mission to smuggle him out of the hospital. Again, that’ll probably be to avoid the person out to get him or the cops.

Kayla will want to protect “Steve” despite the pain he’s caused her. She won’t realize she’s actually protecting the great Stefano DiMera!

Days of Our Lives spoilers say “Steve” could face some hurdles as he deceives Kayla. The more time Kayla spends with “Steve,” the more likely it becomes that she’ll figure out the truth.

Kayla already knows “Steve” hasn’t been acting like himself at all. Her mind obviously isn’t going right to implanted memories, but it might go there after Princess Gina is publicly exposed – and she will be soon.

It sounds like Stefano will have a real mess on his hands. We’ll give you updates as other Days news comes in. Stay tuned to DOOL and don’t forget to check CDL often for the latest Days of Our Lives spoilers, updates and news.