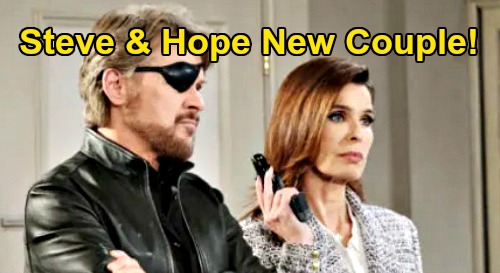 Days of Our Lives (DOOL) spoilers tease that Steve Johnson (Stephen Nichols) will soon regain his memories of his life. This is great news, especially since Kayla Brady (Mary Beth Evans) has had some pretty tense moments worrying about whether her actions in the operating room ended up costing Steve all his memories. Fortunately, it seems that soon, Steve will be acting like the Steve we’ve been missing for months.

But Steve is going to get some heavy news in the coming days. He’s going to learn that he was captured and that his body was taken over by Stefano DiMera’s (last played by Stephen Nichols) “essence.”

That’s going to come as a huge shock, not to mention that Steve will learn that while he was gone, he divorced Kayla and his beloved sister Adrienne Kiriakis (Judi Evans) passed away. It will be a lot for Steve to take.

It looks like Marlena Evans (Deidre Hall) may try to step in and help, but who knows how much help she’ll be at this point. After all, Steve is going to learn that, as Stefano, he victimized Marlena and had Wilhelm Rolf (William Utay) implant a chip in her brain so that she’d “submit” to him.

That’s going to be a lot to take, and Steve is going to feel horrible about all of the terrible things that he did while he was running around as Stefano.

Worse, Steve’s going to find that the person who should be his main source of support – Kayla – is now involved with Justin Kiriakis (Wally Kurth). That will be a devastating blow, and it will also mean that Steve will need somewhere else to turn for daily support.

And Days of Our Lives spoilers indicate that the person Steve will turn to could be Hope Brady (Kristian Alfonso).

It makes sense that Hope and Steve might come together and bond over what they’ve each been through. After all, both Hope and Steve were turned into someone else by Rolf and ended up causing a tremendous amount of turmoil for the people they care about.

DOOL spoilers say that Hope will continue to have a difficult time dealing with all the things she did as Princess Gina Von Amberg (Kristian Alfonso), and it looks like she’ll soon pay Steve a visit.

From there, Days of Our Lives spoilers say that Steve and Hope will bond, most likely through their shared experience of having a huge chunk of missing time plus the knowledge that they did horrible things while someone else was in control of their bodies.

In fact, for Steve, Hope may be the only person who really understands what he’s going through, and vice versa.

And if Kayla actually chooses to be with Justin, we could see Steve and Hope spend more time together going forward. Could Steve and Hope’s bonding lead to a romance down the line?

If Kayla does move forward with Justin, then Steve would be free, and Hope is certainly free at this point, so we could see Steve and Hope’s bond blossom into something more.

It would certainly make sense for Steve and Hope to gravitate toward each other, given their similar experiences. But would you like to see Steve and Hope be a true romantic couple? Stick with DOOL and with CDL for all of your soap news and updates. We’ll be sure to keep you up on all the sizzling Days of Our Lives spoilers as we hear them!