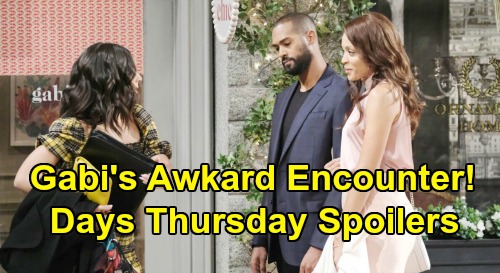 Days of Our Lives (DOOL) spoilers for Thursday, April 2, tease that Nicole Walker (Arianne Zucker) will demand answers from Dr. Raynor (Victoria Platt). In New York, the doc will feel backed into a corner. Dr. Raynor may keep denying the baby swap at first, but Nicole won’t give up. She’ll insist Mackenzie “Mickey” Horton needs to be with her true parents, but Dr. Raynor’s confession is the only way.

DOOL fans can expect Nicole to rev up Dr. Raynor’s guilt. Days of Our Lives spoilers say Dr. Raynor finally won’t be able to take it anymore. After Dr. Raynor comes clean, Nicole will know what she has to do.

It’ll be hard for Nicole to hear that her hunch is right, but she’ll realize the truth has to come out. Nicole will plan to head home and break Eric Brady’s (Greg Vaughan) heart with the baby swap bomb.

In the meantime, Eric will get updates from Brady Black (Eric Martsolf). Now that all the drama at Maison Blanche has wrapped up, Eric will be relieved to know Marlena Evans (Deidre Hall) is safe and Brady wasn’t too badly injured. Eric will also mention Nicole’s “business” trip to Brady, which will lead to the exposure of Nicole’s lie.

Nicole claimed to be going on a trip for Basic Black, but that obviously wasn’t the real story. As we already pointed out, Nicole wanted to track down Dr. Raynor and get her to admit the babies were switched. Nicole just fibbed a bit since she didn’t want Eric to know – not until she was absolutely certain!

Days spoilers say Brady will think there must’ve been some confusion. Nicole didn’t have any projects going on that would’ve taken her to New York. Naturally, Eric will be puzzled and concerned over Nicole’s deception. Eric knows Nicole well enough to realize that when she’s hiding something, trouble is usually brewing!

Since Eric will want to talk to Abe Carver (James Reynolds) about this suspicious news, Brady will offer to babysit Mickey. Days of Our Lives spoilers say Eric will thank Brady and dash off, but there’s a point to Brady and Mickey’s time together.

It won’t be long until Brady notices the faint heart-shaped birthmark on Mickey’s neck, so the wheels will definitely start turning.

Other Days spoilers say John Black (Drake Hogestyn) will resort to trickery. Marlena needs surgery to truly get back to her old self, so it looks like John will dupe Dr. Wilhelm Rolf (William Utay) into performing it.

Over with Gabi Hernandez (Camila Banus), she’ll run into two of her least favorite people. Gabi will have a tense encounter with a still angry Eli Grant (Lamon Archey) and Lani Price (Sal Stowers).

It’s safe to say Gabi won’t be forgiven anytime soon, but she doesn’t care about that. As long as Gabi’s got her freedom and Arianna Horton (Sydney Brower), she has what she needs to move on. Of course, Stefan DiMera’s (Brandon Barash) DOOL return is sure to shake things up in the coming weeks! CDL’s the place to be for exciting Days of Our Lives spoilers, updates and news.