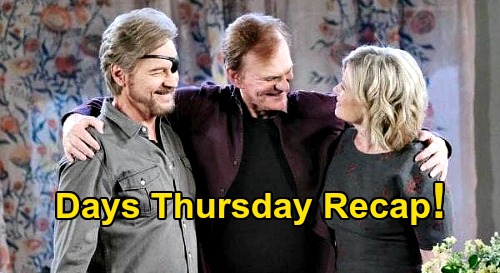 Lani then got an abdominal pain, and she and Eli headed for the hospital to get it checked out.

At the Brady Pub, Jack Deveraux (Matthew Ashford) heard from Jennifer Deveraux (Melissa Reeves) from Florida. Jennifer’s plane was oversold and she said she wouldn’t be back until tomorrow.

Jack was bummed and looked sadly at the flowers he had bought for Jennifer’s return. Jack then went outside, where he encountered Xander Kiriakis (Paul Telfer), who was all happy that Sarah Horton (Linsey Godfrey) had agreed to have dinner with him later.

Xander updated Jack on how he scored a date with Sarah after the church bombing disaster and the masseuse/hooker misunderstanding. Xander was nervous about his date, and he didn’t want to blow it, so Jack told him to keep it simple.

Xander hugged Jack, thanking him for being a friend. Afterwards, Jack went back in the pub, where he texted Jennifer. Suddenly, Jennifer appeared from the back room – turns out, she got the last seat on the plane. Jack and Jennifer hugged happily.

At the hospital’s labor and delivery ward, Eli and Lani arrived, and Sarah got them settled into a room. Sarah examined the monitor and had a reaction. “Just give me a second, this isn’t what I was expecting,” Sarah said, worrying Eli and Lani.

“Eli, Lani, your baby is fine,” Sarah said. “Actually, they both are.” Eli and Lani were stunned to hear they were having twins, and Sarah said it was rare to find out this far along in the pregnancy, but it was not unheard of.

Eli and Lani had some cute moments as they were absorbing the news of their twins. Ultimately, they were thrilled by the news and couldn’t quite believe it was true, and they said they couldn’t wait to tell their family.

Meanwhile, in town square, Chad DiMera (Billy Flynn) enjoyed a drink with Kate DiMera (Lauren Koslow) and told Kate that he was headed to Florida to see Abigail DiMera (Kate Mansi). Chad shared that he was having Gwen (Emily O’Brien) spy on Gabi DiMera (Camila Banus) at the DiMera mansion.

Chad told Kate about how he missed a big meeting with an investor and Gabi swooped in and handled it, and Kate offered to keep an eye on what goes on at the mansion while Chad was away.

Over at the DiMera mansion, Gwen snuck into Gabi’s room, then had to hide in the wardrobe when she heard Gabi coming down the hallway. Gabi entered and got on the phone trying to secure an appointment with Li Shin (Remington Hoffman). Gwen listened.

Gabi was sitting on her bed when Jake Lambert (Brandon Barash) walked in wearing only a towel. Jake wanted some soap, and he and Gabi bickered about that for a moment, then Gabi took the opportunity to berate Gwen, calling her a “cheap whore” in the process.

Gabi eventually took Jake down the hall to find some soap. Gwen emerged from the wardrobe, peeved.

Downstairs, Gwen started drinking, then got a call from Chad, who was still in town square. Gwen reported to Chad that Gabi had called Shin’s office but that she got interrupted and hung up. Chad took note, then told Gwen to keep him posted.

Back in Gabi’s room, Gabi called Shin’s office again pretending to be Chad’s assistant. Gabi arranged to reschedule Chad’s investor meeting from Friday to that evening, when Chad would be out of town.

Back downstairs, Jake walked in to find Gwen still drinking. Gwen griped about how Gabi treats her like rubbish, and she shared that she saw Jake in Gabi’s room half naked. Jake and Gwen bickered about that until Gabi walked in and needled Gwen.

Gwen helped herself to some nearby champagne and made a big production out of telling Jake to come upstairs with her. Gabi was irked as Jake left with Gwen.

Back in town square, Chad told Kate that Gabi was up to something with Shin. Kate promised to keep an eye on things at the mansion while Chad was away. Later, Xander arrived in town square to meet Sarah, who was late because of helping Eli and Lani. But soon, Sarah showed up, and she and Xander looked at each other happily.

Back at the DiMera mansion, Chad arrived to find Gabi there. “Say hello to Shin for me. I’m sure you’ll be working him again once I leave,” Chad said as he got ready to leave for Florida. Gabi looked perturbed at Chad walked out of the room.

Over at Steve Johnson (Stephen Nichols) and Kayla Brady’s (Mary Beth Evans) apartment, Steve and Kayla got cozy and were about to head to the bedroom when Roman Brady (Josh Taylor) barged in to visit.

Roman wanted to hear the whole story of how Steve and Kayla got back together, and he rambled on about his recent fishing trip and Allie Horton’s (Lindsay Arnold) baby.

Steve and Kayla did their best to get rid of Roman, but he went on and on. Finally, Steve gave Roman a box of cigars and told him to go to the hospital and hand them out as a proud great grandpa. Roman finally left, and Steve and Kayla headed to the bedroom happily.

Finally, back at the hospital, Roman and Kate stood at the nursery window and looked at Allie’s baby through the glass. Roman offered Kate one of the cigars, and Kate accepted. “It’s hard to believe we’re great-grandparents again,” Kate mused.

Roman told Kate that she didn’t look old enough to even be someone’s grandma, and she returned the compliment.

There’s definitely a lot going on right now on Days of Our Lives, so stay tuned! We’ll give you updates as DOOL news comes in. Stick with the NBC soap and don’t forget to check CDL often for the latest Days of Our Lives spoilers, daily episode recaps, and news.