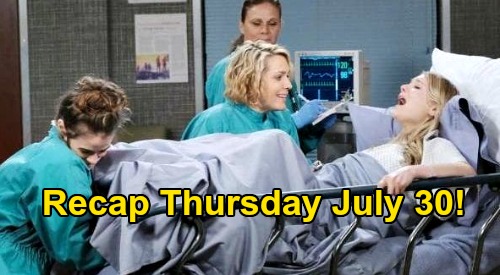 Days of Our Lives (DOOL) spoilers recap for Thursday, July 30, reveal that Allie Horton (Lindsay Arnold) doubled over in pain at Eric Brady (Greg Vaughan) and Nicole Brady’s (Arianne Zucker) apartment, then the pain went away.

Sami Brady (Alison Sweeney) said that Allie couldn’t be in labor, since she was just 8 months along. Suddenly, Allie’s water broke, and Eric rushed to go bring the car around. Allie, Sami, and Nicole bickered amongst themselves, and they all left for the hospital.

At Jake Lambert’s (Brandon Barash) apartment, Jake returned to find Gwen (Emily O’Brien) waiting for him. Jake had been out looking for Ben Weston (Robert Scott Wilson) but had no luck.

Gwen and Jake argued over Jake inviting Gabi DiMera (Camila Banus) to Ben and Ciara Weston’s (Victoria Konefal) wedding, but they eventually made up and made love. Afterwards, Gwen decided that they needed to move into the DiMera mansion.

Jake balked, but Gwen ultimately persuaded him, saying that he “deserves his own manservant.” Meanwhile, over at the DiMera mansion, Gabi and Li Shin (Remington Hoffman) returned from lunch and were about to toast to their success over something, when Chad DiMera (Billy Flynn) walked in and quickly found out that Gabi had sweet-talked an investor for Li.

Chad was peeved, and he tried to explain that he had been in Florida visiting Abigail DiMera (Kate Mansi).

Li said that he only had a brief window with the investor, and that Gabi had saved the day. “That’s excellent news,” Chad said through gritted teeth. Chad tried to remind Li about Gabi’s history, but Li wasn’t having it, and Li happily kissed Gabi’s hand before leaving.

Chad then turned to Gabi and said that he wouldn’t let her worm her way back into DiMera Enterprises.

Chad and Gabi argued, and Gabi taunted Chad about her making nice with Jake. Chad wondered if Gabi was planning on stealing Jake from Gwen. Gabi confidently said, “Who would settle for ground beef when you can have filet mignon?”

Just then Gwen and Jake appeared, and Gwen said that they like theirs medium rare, and that they’re moving in. Chad chuckled.

At the Salem Inn, Ciara returned to her room to find Claire Brady (Olivia Rose Keegan) waiting for her. Claire insisted that the police proved that she had nothing to do with the bombing, and Ciara wondered why Claire was there.

Claire proceeded to tell Ciara that someone framed her for ruining the dress, taking the ring, making Ciara sick, and planting the bomb. Claire thought they should team up to find this person and to find Ben.

Ciara initially balked, but Claire eventually persuaded her to work as a team to find Ben. Ciara and Claire hugged. Meanwhile, over at the hospital, Allie was now settled into a delivery room being examined by Sarah Horton (Linsey Godfrey).

Eric came in the room and Sarah announced that Allie was just about ready to give birth. Sami tried to comfort Allie, saying that she’d stay as her coach.

Allie said that she didn’t want Sami as her coach, and Sami reeled. Sarah left to let them sort this all out, and Allie decided that she wanted Nicole to stay and be her coach.

Sami protested, which led to more arguing. Sarah returned and Allie announced that Nicole would be her coach. Eric dragged Sami out of the room as she continued to protest, and Allie had another contraction.

At the nurses’ station, Eric and Sami bickered, with Eric blasting Sami for interfering with Rafe Hernandez (Galen Gering) and being “so judgmental.” Sami started in on Nicole, and Eric shut that down, too. Back in Allie’s room, Sarah and Nicole helped Allie breathe and get ready to give birth.

At the warehouse, Eve Donovan (Kassie DePaiva) walked ominously toward Ben. “Oh, wow, you don’t look so good there. Ben,” Eve taunted. Ben realized that Eve had blown up his wedding and had him kidnapped, and he immediately asked about Ciara.

Eve said that Ciara was fine. Eve went on taunting Ben about how he should be on his honeymoon right now.

Eve got in Ben’s face about murdering Paige Larson (True O’Brien), upsetting Ben terribly. “I thought the state was going to take care of this a few months ago,” Eve told Ben. “But you escaped your punishment.

You won’t escape this time, you hear me?” Eve yelled. Eve walked around Ben, tormenting him about how he killed Paige, and saying that simply killing him in return would be too easy.

“So instead you planted a bomb?” Ben asked. Eve said the bomb was a mere distraction, and that Vincent (Michael Teh) had whisked Ben away.

Ben asked what Eve was going to do with him, and Eve said that Ben was going to suffer the way he suffered. “You don’t have a daughter,” Eve said. “But you have a wife.” Eve cooed. Ben looked horrified and told Eve not to touch Ciara. “I’m not going to kill Ciara,” Eve replied. “You are.”

That was a great episode of DOOL, and there’s more coming on Friday, so stay tuned! Remember, we’re here with all your latest soap news and spoilers, so keep us bookmarked so you don’t miss a thing. Here at CDL, we’ve got you covered with all the latest Days of Our Lives updates.