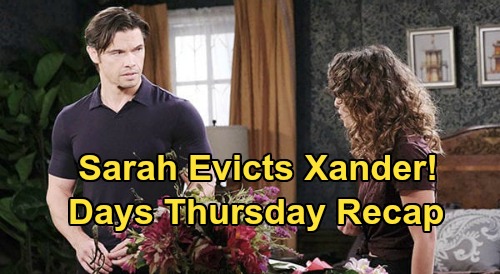 Days of Our Lives (DOOL) spoilers recap for Thursday, June 25, reveal that Allie Horton (Lindsay Arnold) was in town square following her visit with Rafe Hernandez (Galen Gering) when a shirtless Xander Kiriakis (Paul Telfer) came along, on a run. Xander said hello to Xander and asked when Allie was due. “I beg your pardon?” Allie said. Xander then introduced himself, and he said that he overheard her talking with her brother earlier.

Allie blasted Xander for eavesdropping on her, and she said that Will Horton (Chandler Massey) told her to stay away from Xander. After a little more back-and-forth, Allie said that she didn’t really care about Xander one way or the other, and they talked a bit about her adoption plan.

Xander said that she could give her baby to someone very grateful, then he continued on with his run. Allie looked after him, perplexed.

At the Kiriakis mansion, Lucas Horton (Brian Dattilo) attempted to absorb Will and Sonny Kiriakis’ (Freddie Smith) assertion that they could adopt Allie’s baby. Lucas was hesitant about that, and Will wondered if it was because of his domestic situation with Sonny.

Lucas said it was absolutely not about that, and that he was thrilled that Will and Sonny wanted another baby.

However, Lucas expressed concern about the baby’s father, who could come wanting a relationship with his child someday. Lucas said that he didn’t want a terrible and heartbreaking situation for either Allie or “WilSon,” and Will and Sonny understood that this was a concern.

Lucas said that he thought Allie’s judgment might be clouded by her fear of Sami Brady’s (Alison Sweeney) reaction.

After Lucas left, Will and Sonny considered what Lucas said, but Will seemed pretty confident that Allie wouldn’t change her mind. Will and Sonny decided that they’d talk with Allie tomorrow, and let her make her own decision.

Meanwhile, upstairs in Sarah Horton’s (Linsey Godfrey) bedroom, Maggie Kiriakis (Suzanne Rogers) helped Sarah unpack her things. Maggie saw Sarah’s wedding dress in the armoire and wondered why she had kept it, but Sarah said it didn’t mean that she still loved Xander.

Sarah admitted that the headstone had meant a lot to her, but she got irritated when Maggie seemed to be defending Xander.

Soon, Xander came in with flowers for Sarah, and Maggie took off. Xander then blurted out, “What if I could give you another baby?” Sarah got upset immediately, and she remained upset even as Xander explained about Allie being pregnant and wanting to give her baby up for adoption. Sarah exploded, ranting about how no baby could replace the one she lost.

Sarah kept ranting, and she threw the flowers at Xander in a huff. Xander fired back that he was in mourning, too, but Sarah wasn’t having any of it and she told Xander that she wanted him to move out of the mansion. Xander left, gutted, and Sarah fell to the floor crying after he left.

At Eric Brady (Greg Vaughan) and Nicole Walker’s (Arianne Zucker) apartment, they discussed wedding plans and made love, then when they emerged from the bedroom, Allie was there.

Allie disclosed that she had decided to give her baby up for adoption, and that she wanted Rafe to have her baby. Eric was immediately skeptical and had some questions, which put Allie off, but Nicole was firmly on Allie’s side on this.

Eric wondered how Sami would feel knowing that her ex-husband was raising her grandchild, but Allie said she didn’t care what her mom thought or did. Nicole said that Allie was right about this.

Eric protested, saying that it might be a bit soon to decide who adopts the baby, but Allie was insistent that it should be Rafe. Allie didn’t think that Sami would ever find out about her pregnancy, but Nicole and Eric said that was impossible.

Allie fired back that Sami never leaves EJ DiMera (James Scott) and that she likes Rafe. “But that was before Carrie,” Eric said. “What about Aunt Carrie?” Allie asked. Allie then learned that Carrie Brady (Christie Clark) and Rafe had a fling.

Allie reeled, wondering why everything had to be so complicated. Nicole reassured Allie and said that she needed to make the decision that feels right to her.

In the park, Kayla Brady (Mary Beth Evans) talked with Steve Johnson (Stephen Nichols). Steve said he heard from Jack Deveraux (Matthew Ashford) that her wedding to Justin Kiriakis (Wally Kurth) was next Friday afternoon. Inexplicably, Kayla and Steve discussed whether Steve would come to the wedding, and Kayla said that Justin would be ok with it.

Suddenly, Kate DiMera (Lauren Koslow) came along and pressed Steve about the key to the city ceremony. Steve refused to go, but Kate persisted, and after sort of bringing Kayla into the discussion, Steve said he’d do it. Kate said the ceremony was next Friday afternoon. Kate left, and Steve said it looked like he wouldn’t attend the wedding after all.

Kayla and Steve talked around each other some more, and Steve called Kayla “sweetness” a couple times. Kayla said that she didn’t mind, given their history. Steve didn’t tell Kayla how he really felt, instead saying that he was happy for Kayla and Justin and that he hoped that she’d be happy. Steve walked off, looking back as he did.

At the DiMera mansion, Lucas walked in as Kate was reading something on her tablet. Kate snarked about Lucas being overbearing with Allie, and Lucas said that Allie wanted to give her baby up for adoption. “I see,” Kate said. Lucas then said that Sonny and Will wanted to adopt the baby. Kate stared blankly.

At Eli Grant (Lamon Archey) and Lani Price’s (Sal Stowers) apartment, someone watched from outside the apartment as Eli and Lani went in. Lani said that she had been having the creepy feeling like someone’s been watching her, then she and Eli canoodled and talked about their wedding tomorrow.

Lani then told Eli that he needed to go for the night, since it was bad luck for him to see her on their wedding day before the wedding takes place. Eli balked, but Lani insisted, and Eli got packed up and left. Whoever was lurking out in the hallway kept watching Lani, and Lani got another creepy feeling as she shut the door.

That was a terrific episode of Days of Our Lives, and there’s more on the way tomorrow, so stay tuned! Keep CDL bookmarked so you don’t miss any of our up-to-date DOOL spoilers, news, and daily recaps.