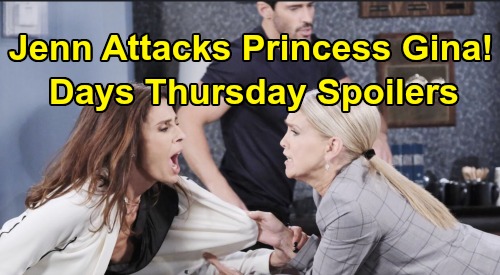 Days of Our Lives (DOOL) spoilers for Thursday, March 5, tease that Jennifer Deveraux (Melissa Reeves) will head to the Salem PD for a confrontation. She’ll be ready to face Princess Gina Von Amberg aka Hope Brady (Kristian Alfonso), who’s responsible for her life-threatening tumble.

Princess Gina shoved Jennifer off the bistro balcony and nearly killed her, so Jenn will definitely be ready to unleash her fury.

Jennifer lost a year of her life thanks to Princess Gina’s shove. Of course, none of this is Hope’s fault since she was dormant during all of it. Princess Gina is still running the show, so Jennifer will want a chance to rip into her.

Days spoilers, news and updates say Princess Gina won’t be keen on meeting with Jennifer. Shawn Brady (Brandon Beemer) will literally have to drag Princess Gina into the interrogation room and handcuff her to the chair.

It won’t be long until Jennifer blasts Princess Gina and grabs her jacket, so this should be quite a DOOL showdown.

Elsewhere, Kate Roberts (Lauren Koslow) will also find herself on the receiving end of backlash. Days of Our Lives spoilers say Roman Brady (Josh Taylor) will lash out at Kate in Thursday’s episode.

While Kate takes whatever Roman dishes out, Chad DiMera (Billy Flynn) will experience the first signs of mind control. He was drugged by Stefano, so that’ll leave him under Stefano’s spell soon enough.

The changes in Chad should be subtle at first, but things will take a deadly turn in the week ahead. Chad will be given deadly orders, so Stefano’s plan will bring grave danger.

In the meantime, Days of Our Lives spoilers say another plan will spiral out of control. Justin Kiriakis (Wally Kurth) and Marlena Evans (Deidre Hall) will make the risky decision to meet with Stefano. It seems Marlena will insist on being part of this herself, so Hattie Adams (Deidre Hall) may stay out of it.

Justin and Marlena will move forward with hostage negotiations, but the scheme’s about to head downhill fast. Stefano will gain the upper hand and spark sudden disaster, so some explosive scenes are looming.

In fact, Days spoilers state that John Black (Drake Hogestyn) will get knocked out cold before the week’s over. Marlena’s kidnapping is on the way, so don’t miss all the action in Salem. We’ll keep you posted as other DOOL news emerges. Stop by CDL frequently for great Days of Our Lives spoilers and updates.