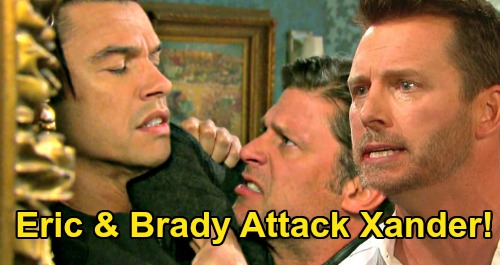 Days of Our Lives (DOOL) spoilers tease that Nicole Walker (Arianne Zucker) will arrive at a horrifying conclusion. She’ll start putting the baby swap clues together – and it looks like everything will finally click into place. Once that happens, Nicole will have to decide what she’s going to do next.

Since Days just put Nicole and Eric Brady (Greg Vaughan) back together, Nicole probably won’t sit on the switch information. Although Nicole will know this is going to break Eric’s heart, she’ll have no choice but to tell him.

Thankfully, that means Nicole should stay out of the blame game – at least when it comes to the baby swap victims. You can bet Victor Kiriakis (John Aniston) and Xander Kiriakis (Paul Telfer) will have some harsh words for Nicole once the truth spills, but everyone else should appreciate her honesty. However, Nicole’s mystery-solving will lead to Xander and Victor’s lives blowing up!

There may be some initial DOOL conflict between Brady and Eric following the baby swap reveal, but they’ll hopefully work through any issues quickly. It’s not Eric’s fault that he was tricked along with Sarah Horton (Linsey Godfrey).

If Eric had any idea that he was raising Brady and Kristen DiMera’s (Stacy Haiduk) child, he would’ve come forward and returned Rachel Isabella DiMera Black.

This isn’t on Eric at all, so Brady’s wrath needs to be reserved for Victor and Xander. The same goes for duped Daddy Eric! Victor will face his fair share of fury, but Days of Our Lives say Xander may get the worst of it.

Xander’s the one who’s been so heavily involved in keeping it all in play. Once Brady and Eric know the real story, they’ll be able to think back on how hard Xander worked to keep the swap quiet.

Days of Our Lives spoilers say Brady and Eric may unite with a common goal. These brothers are used to battling each other, but they may band together to make Xander pay.

Victor will be included in the backlash for sure, but he’s older and has been in poor health. It’d be better for Eric and Brady to focus most of their rage on Xander!

Regardless, Days spoilers say exciting things are coming up in Salem. We’ll give you more news as other DOOL details roll in. Don’t miss CDL’s Days of Our Lives spoilers and updates.