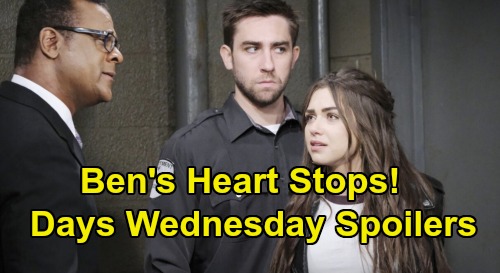 Days of Our Lives (DOOL) spoilers for Wednesday, March 4, tease that the wheels will keep turning for Nicole Walker (Arianne Zucker). She’s already been suspicious of Xander Kiriakis (Paul Telfer) and Victor Kiriakis (John Aniston), who were awfully determined to get Tate Black (Colin and Kyle Schroeder) tested.

Gabi Hernandez (Camila Banus) ended up being Mackenzie “Mickey” Horton’s bone marrow match, but the damage was done. Now Nicole’s unraveling the mystery and will soon get another crucial clue.

Days spoilers say Nicole will watch Xander and Dr. Raynor closely on Wednesday. She’ll be quite curious about their interaction, which will get more intense by the second.

Nicole will begin to think the topic’s pretty hush-hush, so she’ll do some digging and hope she can figure this mess out. She doesn’t know it yet, but she’s on the verge of uncovering the baby switch secret. This DOOL storyline will heat up next week, so stay tuned for another round of exciting drama. 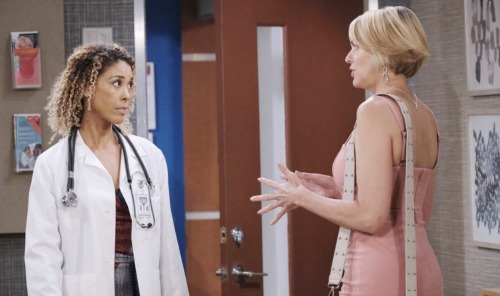 Meanwhile, Days of Our Lives spoilers say Ben Weston (Robert Scott Wilson) will remain near death at Statesville. Ciara Brady (Victoria Konefal) just burst in with Evan Frears aka Christian Maddox (Brock Kelly) as her hostage. She’ll push Evan against the glass in Wednesday’s episode and show him that another life will be lost if he doesn’t confess.

Evan already killed Jordan Ridgeway (Chrishell Stause), so Ciara will think the least he can do is take responsibility. Ben didn’t murder his sister and doesn’t deserve to die for it.

Days of Our Lives spoilers say Evan will ultimately make a confession, so Marlena Evans (Deidre Hall) will urge the warden to halt the execution. She’ll argue that this is clearly a complicated situation that needs time to be sorted out.

Marlena’s heartfelt pleas didn’t work before, but this one finally will. Days spoilers, news and updates say the lethal injection process will cease, but it’ll be a bit too late. Ben’s heart will stop, which will leave Ciara in a panic. She’ll beg Ben to come back to her so they can live the life together that they planned.

Rafe will be desperate to get David back home safe and sound. Evan may be reluctant to divulge where he stashed David or who has him, but more info will come out in the week ahead.

Until then, let’s talk about Maggie Kiriakis (Suzanne Rogers). She’ll head to Julie’s Place for a meal with Victor, but it’ll be tough for her to just act like everything’s normal.

Now that Maggie knows she’s guilty of killing Adrienne Kiriakis (Judi Evans), she’ll be ready to pay the price for her actions. Maggie won’t feel right about being out on bail, so she’ll be eager to enter her guilty plea and get her sentence started.

It sounds like some great scenes are coming up on the NBC soap. As other updates become available, CDL will have the hottest Days of Our Lives spoilers and news for you. Don’t forget to drop by regularly for all the details!