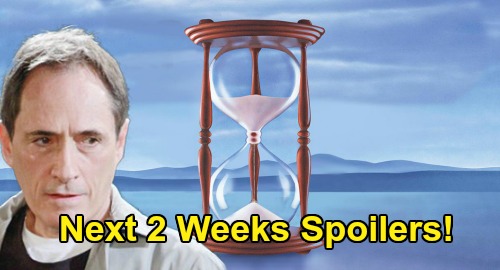 Days of Our Lives (DOOL) spoilers for next two weeks, March 2 to March 13, tease that some bombshells are ahead in Salem. During the week of March 2-6, Sonny Kiriakis (Freddie Smith) will be floored by Evan Frears aka Christian Maddox’s (Brock Kelly) admission. Evan will confess that he’s David Ridgeway’s (Caleb and Kyler Ends) father and hope Sonny will agree to be a family with them.

Naturally, Sonny will be less focused on the request and more focused on the gun pointed at him. He’d be wise to say whatever it takes to keep Evan from shooting him! Fortunately, Ciara Brady (Victoria Konefal) will come barging in with Will Horton (Chandler Massey) soon after. Once Ciara snatches Evan’s gun, she’ll drag him down the prison and force him to clear Ben Weston’s (Robert Scott Wilson) name.

Days spoilers say Evan will indeed admit he killed Jordan Ridgeway (Chrishell Stause). It’ll be enough to stop Ben’s execution, but it’ll already be over halfway completed. Ben will have received two out of three lethal injection doses at that point, but desperate Ciara will push Ben to fight his way back to her.

Although Ben’s heart will stop, it’ll ultimately start ticking again. While Ben’s revived, Rafe Hernandez (Galen Gering) will beg Evan to give David back. Evan kidnapped his son, but where did he stash him and who is David with? Rafe will want answers to these questions, but Days may not give them just yet.

During the week of March 9-13, Chad will do some pretty twisted things – like try to smother Gabi and plan Kate Roberts’ (Lauren Koslow) murder. It’ll be due to Stefano’s mind control, but DOOL fans can still expect some danger.

Other Days of Our Lives spoilers say Marlena will be in a real bind. She’ll do her best to talk some sense into Dr. Wilhelm Rolf (William Utay) and avoid a wild procedure.

Elsewhere, Evan will score a legal win that infuriates Rafe. His confession at Statesville may not hold up since it’ll be coerced. Confessions made at gunpoint just don’t count in the law! Regardless, Evan will meet up with someone stunning soon after, so his mysterious ally should finally be revealed.

Is Orpheus (George DelHoyo) the person Evan called? Was he in the recent kidnapping plot? Whatever the case, Days of Our Lives spoilers say some shockers are brewing. Over with Will, he’ll really let Victor Kiriakis (John Aniston) have it! Now that Will’s free, he’ll think it’s high time Victor heard how much damage he did with the cover-up.

Speaking of cover-ups, Nicole Walker (Arianne Zucker) will put some puzzle pieces together thanks to Xander Kiriakis’ (Paul Telfer) blunder. He’ll get a bit careless by having an intense faceoff with Dr. Raynor (Victoria Platt), the baby switch doctor that’ll be back in town.

Once Nicole spots the two of them and perhaps listens in, she’ll worry they have some unsettling secret. Nicole will start connecting the dots right as Kristen DiMera (Stacy Haiduk) asks Eric Brady (Greg Vaughan) to hold Mackenzie “Mickey” Horton.

Finally, Days spoilers, updates and news say Princess Gina aka Hope Brady (Kristian Alfonso) will gloat about remaining this way forever. She’ll rub it in Ciara and Shawn Brady’s (Brandon Beemer) faces that they won’t be getting their mother back.

Of course, Shawn and Ciara won’t give up! As other DOOL updates and news are released, be sure to check back in and read up on all CDL’s hot Days of Our Lives spoilers.