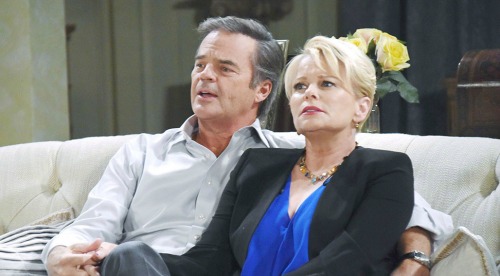 Days of Our Lives (DOOL) spoilers tease that Justin Kiriakis (Wally Kurth) will battle growing concerns. He’ll find himself torn and most likely feel selfish about it during the week of March 9-13. It looks like Kayla will be out of Stefano DiMera aka Steve Johnson’s (Stephen Nichols) twisted web by then, but this experience was certainly eye-opening.

Kayla thought Steve abandoned her and turned into a total jerk. Every horrible thing she’s blamed Steve for wasn’t his fault. Steve’s also a victim here, so that’s been a real game-changer for Kayla.

That’s the part that’ll concern Justin, who naturally can’t root against Steve getting his mind and body back. It’s unfair that Steve had his life stolen from him, so that obviously needs to be rectified.

Even so, Justin has found love again with Kayla and he won’t want to let that go. Kayla was a real light in the darkness after Adrienne Kiriakis (Judi Evans) died. She helped Justin see a way forward.

Days of Our Lives spoilers say it’ll be hard for Justin to think about losing Kayla, but that’s exactly what he’ll fear will happen. DOOL viewers can expect Justin to wrestle with his thoughts. He’ll ultimately decide to confide in Jack Deveraux (Matthew Ashford) about this tricky situation.

Jack certainly wants the real Steve back, but he should be able to understand where Justin’s coming from. He might point out that neither one of them know what the future holds.

Jack may contend that Kayla could still choose Justin, but it’s doubtful he’d really believe that – nor would Justin! The same goes for Days of Our Lives fans, who know Steve and Kayla are soulmates.

If Steve’s an option, Kayla’s always going to find her way back to him. Days of Our Lives spoilers, updates and news say Steve will get back to normal eventually. Once Steve’s himself again, Kayla will inevitably reunite with him. Days isn’t going to keep a supercouple like “Stayla” apart for too long!

Justin will be heartbroken, but perhaps there’s light at the end of the tunnel. Days of Our Lives spoilers say redemption’s coming for Maggie Kiriakis (Suzanne Rogers) down the road.

There’s also strong buzz about Adrienne returning from the dead. Judi Evans has been back on set following the hiatus as CDL reported, so it’s reasonable to think Justin and Adrienne will get a heartfelt reunion.

Are you glad some DOOL couple shakeups are brewing? Are you rooting for Steve and Kayla? What about Justin and Adrienne? As other updates emerge, check back for more news and details. CDL will have the hottest Days of Our Lives spoilers and scoops.