Days of Our Lives Spoilers: Princess Gina Taunts Shawn & Ciara – How Will They Ever Get Hope Back? 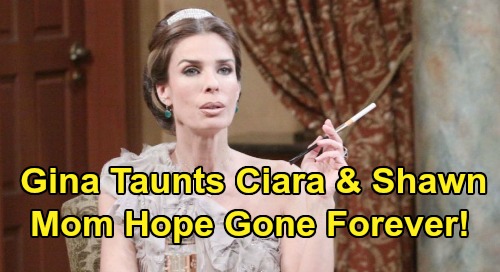 Days of Our Lives (DOOL) spoilers tease that Princess Gina Von Amberg aka Hope Brady (Kristian Alfonso) will soon lash out again. As DOOL viewers know, Hope’s son Shawn Brady (Brandon Beemer) previously tried to get through Hope by talking to Princess Gina, but it’s a tough situation, since Princess Gina’s “essence” is now in control of Hope’s brain and body. And that makes for an impossible situation for Shawn, since he desperately wants his mom back.

Well, soon Ciara Brady (Victoria Konefal) will become preoccupied with the situation involving Princess Gina and Hope as well. Of course, Ciara has been working feverishly lately to see to it that Ben Weston (Robert Scott Wilson) doesn’t get executed, so she’s been busy tracking down Jordan Ridgeway’s (Chrishell Stause) real killer.

But soon that drama will be behind her, and she’ll be able to focus on the horrible reality that her mom has been wiped out of existence for nearly a year and that Princess Gina has been in her place.

It’s a tricky situation, since nobody really knows at this point whether Hope’s “essence” is still in there somewhere. As DOOL viewers know, Dr. Wilhelm Rolf (William Utay) is the mad scientist responsible for Hope becoming Princess Gina in the first place.

And since Hope gradually became Princess Gina, it would seem that Hope must still be present, but it will probably take Rolf’s expertise to flip the switch, so to speak, to make Princess Gina into Hope again.

And therein lies the problem, since Rolf can’t stand Hope and would basically have to be forced to bring her back. DOOL viewers will remember that Rolf holds a big grudge against Hope for shooting Stefano DiMera (Joseph Mascolo) several years ago.

Dr. Rolf’s certainly not going to willingly eradicate Princess Gina and bring Hope back, which is going to really frustrate Shawn and Ciara.

One wonders how they’re ever going to get their mother back if Rolf is unwilling to do the necessary reversal procedure. And then there’s the issue of what will happen to Princess Gina – clearly, she’s not going to want to go away anytime soon, and she could even use the legal system as a means to remain in control of Hope’s body. It could be a real mess.

In fact, Days of Our Lives spoilers indicate that Princess Gina will basically tell Shawn and Ciara that they’re out of luck. She’ll apparently taunt them, saying that Hope will never come back and that they’ll never see their mother again.

It should be a bad scene, with Shawn and Ciara furious with Princess Gina, Rolf, and Stefano aka Steve Johnson (Stephen Nichols), who all stand in their way of them getting Hope back.

We’ll see what happens, but it looks like Shawn and Ciara might be in a pretty tight spot, as they try to figure out how they’re going to eradicate Princess Gina from Hope’s body and reinstate their mother back into the world. Stay tuned to the NBC soap and check back with CDL frequently for all your latest Days of Our Lives spoilers, updates, and news.