BY hellodrdavis on May 21, 2020 | Comments: Leave Comments
Related : Days of Our Lives, Soap Opera, Spoiler, Television 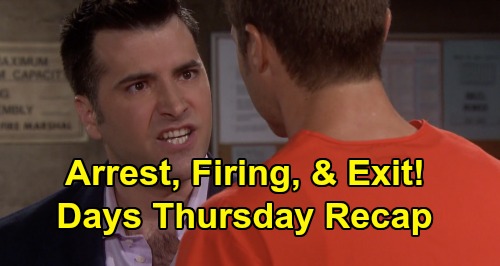 Days of Our Lives (DOOL) spoilers recap for Thursday, May 21, reveal that Sarah Horton (Linsey Godfrey) came out of the bathroom in Brady Black’s (Eric Martsolf) room at the Salem Inn to find Xander Kiriakis (Paul Telfer) still there. Xander told Sarah about Maggie Kiriakis’ (Suzanne Rogers) suicide attempt, and Sarah was horrified. Then Xander dropped the bomb that Maggie wasn’t responsible for the Mother’s Day accident.

It took a few minutes for Sarah to absorb all of this, and Xander rehashed the story of how Orpheus (George DelHoyo) and Evan Frears aka Christian Maddox (Brock Kelly) chloroformed Maggie planning to hold her for ransom, then ran Adrienne Kiriakis’ (Judi Evans) car off the road. Sarah scoffed that everything Victor Kiriakis (John Aniston) and Xander did was for nothing.

Xander tried to get Sarah to talk with him, and he begged her to promise him that she wouldn’t sleep with Brady again. Sarah told Xander that he was unbelievable, and she told him in no uncertain terms to stay out of her life. “Don’t ever think about me, because I’m not going to think about you again,” Sarah seethed.

At the hospital, Brady demanded that Victor fire Xander by the end of the business day, pointing out that Xander only got the job because he switched babies. Brady gave Victor his phone and told him to fire Xander right now.

Victor refused, and Brady yelled about how Victor owed Brady for taking his family away. Victor said that he owed Xander for saving Maggie. Off screen, Victor told Brady about Maggie’s suicide attempt.

Brady was visibly upset by the news, but he still demanded that Victor fire Xander, “or else you’ll never see me again.” Brady blasted Victor for trying to manipulate him with Maggie’s suicide attempt. “Xander is a crap human being, he’s out,” Brady yelled. “Make me the CEO again, now!”

Eli and Lani escorted Gabi into an interrogation room where Wilhelm Rolf (William Utay) sat waiting for lawyer – he had a court hearing later. Gabi begged Rolf to tell Eli and Lani what he did, and how he led her to the serum in the syringe, but Rolf said that he had no idea what Gabi was talking about. Gabi fiercely protested, and Rolf admitted that Gabi came to see him in prison, but he denied leading Gabi to any serum.

Eli and Lani left, and Gabi accused Rolf of setting her up. Rolf admitted doing it because he doesn’t like Gabi. Gabi was furious, and Rolf said that he played her, and that she was gullible. Rolf outright admitted to leading Gabi to a stash of the drug that put Abigail “back in the bin.”

Rolf said that he framed Gabi because she has disrespected Stefano DiMera (Joseph Mascolo). Gabi wondered if this meant that Jake wasn’t Stefan DiMera (Brandon Barahsh), and Rolf said that’s not what he said. “If he is Stefan, then I’m not the one who brought him back, which is not to say that someone else didn’t,” Rolf said.

At Statesville, Justin Kiriakis (Wally Kurth) visited Maggie in the infirmary. It was an emotional meeting, with Justin telling Maggie that he knew she didn’t kill Adrienne. Justin said that Maggie was a good person, with a solid sense of right and wrong, and that she judged herself too harshly. Justin thought that it must have been hell for Maggie.

Justin said that this morning he couldn’t get out of bed thinking about all the pain and lies. Crying, Justin said that he heard Adrienne’s voice telling him to go get Maggie out of there, and that was exactly what he’s going to do. Justin said that it could be a tough road, though, since they needed a confession from Orpheus or Evan to get her out of prison.

After Justin took off, Sarah entered the infirmary and embraced Maggie. Sarah and Maggie had an emotional reunion, and Maggie explained that she just couldn’t bear what she thought she had done to Sarah. Maggie and Sarah were hugging when Brady walked in and told Maggie that he needed her in his life. Through their conversation, Maggie learned that Kristen DiMera (Stacy Haiduk) had run off with Rachel Black.

Brady and Sarah then stepped into the waiting area and spoke briefly. Sarah noted that her mother still wanted to take care of her even after all she’d been through. Sarah told Brady that she was Sarah 2.0 and that Maggie can take care of her, but that together they’d take care of Victor and Xander.

In a visiting room, Evan walked in to see Sonny Kiriakis (Freddie Smith) waiting for him. Sonny snarled that he wanted to come see the animal who killed his mother, and he told Evan that his sister had given him up. Evan said that he wasn’t driving, and Sonny fired back that Maggie tried to kill herself. Evan was horrified.

Sonny blasted Evan, telling him that he hated him. Sonny wondered how Evan let both Will Horton (Chandler Massey) and Maggie go to prison for something he and his father did.

Sonny went on, blasting Evan for not even calling an ambulance or the cops while Adrienne was dying at the scene. Sonny said that Evan needed to formally confess to make things right, but Evan balked.

Sonny eventually got Evan to write down his confession, after threatening to make sure that David Ridgeway (Kyler Ends) would know what a piece of garbage his father was. Evan tearfully took a pen and paper and started writing down his confession abut the accident. This was Brock Kelly’s final DOOL airdate.

Back at the hospital, Jake and Kayla remained at the nurses’ station. Jake had a couple questions about the test results on the syringe, but Kayla couldn’t even look at Jake. Jake wondered what was going on, and Kayla ranted about how he looked like Stefan – the man who ruined her life. “Because of Stefan, I lost the love of my life, and no one can ever take his place!” Kayla fumed.

Justin materialized just as Kayla said that, and he walked up asking if everything was ok, reeling at Jake’s appearance as he did. Jake left, and Kayla asked how much of that Justin heard. “Just enough,” Justin said.

In Victor’s room, Xander arrived and lamented about his disastrous interaction with Sarah earlier, and about how Sarah had slept with Brady last night. Victor revealed that Brady had been there and demanded that he fire Xander.

Xander wondered how Victor responded, and Victor said that he hadn’t told Brady anything, “I thought it was only fair that you hear it first. You’re fired,” Victor said.

That was a great episode of Days of Our Lives, so stay tuned for tomorrow’s episode! We’ll give you updates as DOOL news comes in. Stick with the NBC soap and don’t forget to keep CDL bookmarked for the latest DOOL spoilers, daily recaps, and news.