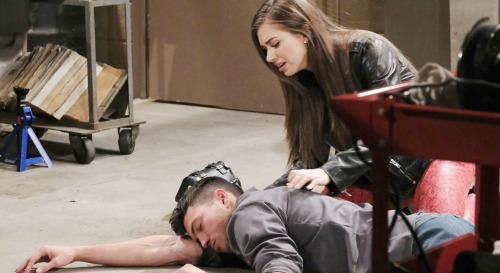 There’s nothing romantic going on between Hope and Steve right now, but Kayla will be frustrated anyway. Steve rejected Kayla and made unilateral decisions about her life. That’s pretty typical of Steve as far as Kayla’s concerned. Although Kayla’s irritated with Steve at the moment, part of her’s always going to love him.

That’s why Kayla will be dealing with plenty of complex emotions in Thursday’s episode. DOOL spoilers say Marlena Evans (Deidre Hall) will push Kayla to share her thoughts.

Since Marlena will see how upset Kayla is, she’ll think it’s best if Kayla gets everything off her chest. Kayla should indeed feel better once she spills how she feels, but it won’t fix her situation.

At Hope’s house, she’ll be feeling blue again as she drinks a beer with Steve. Days of Our Lives spoilers say Steve will be down in the dumps, too. After Dr. Wilhelm Rolf (William Utay) transformed Hope into Princess Gina Von Amberg,” Hope tried to murder people she cares deeply for.

Steve did the same as “Stefano DiMera” – and he’s particularly upset about how he tried to kill Kayla.

Luckily, Hope and Steve will find a nice distraction on Thursday. They’ll find a tactic to help them put the past behind them and hopefully alleviate some of their guilt. Days spoilers say it’ll be destruction day in Salem!

Steve and Hope will gleefully demolish that creepy “Steveano” portrait, so that’ll bring some satisfaction. Hope will also make sure Princess Gina’s tiara is gone for good.

By the end of their destructive session, Hope and Steve should feel like a weight’s been lifted. They’ll also develop a stronger connection and share some laughs, so that’ll be sweet to see.

Over with Gabi DiMera (Camila Banus), she’ll try to make Jake Lambert (Brandon Barash) see that they’re meant to be. Gabi won’t know for sure if Jake’s lying or just battling memory issues. Either way, Gabi will think she might be able to spark something if she kisses her man!

Since Gabi’s convinced this is Stefan DiMera (Brandon Barash), she’ll give Jake a hot smooch and hope it seals the deal. Jake will shove Gabi off him and wonder if she’s on prescription meds. He’ll act like Gabi’s completely lost it, but Gabi will insist Jake is Stefan and that’s that.

After Ben Weston (Robert Scott Wilson) shares a kiss of his own with Ciara Brady (Victoria Konefal), he’ll head to the garage to do some work. Jake won’t be there when some rough-looking guys barge in. Days of Our Lives spoilers say Ben will try to turn them away. He’ll let them know Jake’s out, but they’ll think Ben might be covering for his boss.

It won’t be long until Ben’s beaten and left unconscious on the floor. After this brutal attack, Ciara will pay Ben a visit at work. Days spoilers say Ciara will be horrified by the state she finds Ben in, but she’ll come to his rescue and patch him up later this week.

As other news pops up, we’ll deliver the latest updates. DOOL fans won’t want to miss the twists and turns coming up in Salem! Don’t forget to stop by CDL frequently for sizzling Days of Our Lives spoilers, updates and news.