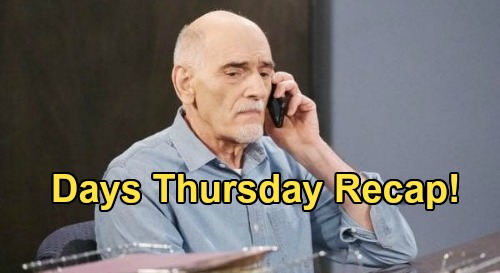 Allie looked at photos of Henry on her phone and wondered why Clyde Weston (James Read) would kidnap her son.

Meanwhile, in the park, Kate DiMera (Lauren Koslow) held Clyde at gunpoint after shooting him in the arm. Kate told Clyde he made a big mistake going after her great grandson, and she was threatening to shoot him again when Abe Carver (James Reynolds) came along, took Kate’s gun, and called the cops.

Kate rushed to take Henry back over to Nicole’s apartment.

At the police station, Eli Grant (Lamon Archey) grumped at Ben Weston (Robert Scott Wilson) for covering for Clyde earlier that evening. Eli got interrupted by a call from Shawn Brady (Brandon Beemer), and Eli informed Shawn that Orpheus (George DelHoyo) was in custody and had lawyered up, while Evan Frears aka Christian Maddox (Brock Kelly) was on the loose.

In Wilhelm Rolf’s (William Utay) lab, Kayla Brady (Mary Beth Evans) scoffed at the idea of carrying the clone of Stefano DiMera (Joseph Mascolo), saying that she was too old.

Rolf said that Kristen DiMera (Stacy Haiduk) had successfully carried a baby to term on his watch, and Kayla insisted that Rolf wasn’t going to touch her body. Rolf menaced toward Kayla with a syringe.

In town square, Steve Johnson (Stephen Nichols) got off a call with Shane Donovan (Charles Shaughnessy) and told Shane thanks for the information.

A few minutes later, back in Rolf’s lab, Kayla was completely paralyzed but conscious, while Rolf said that she’d be pregnant shortly. Suddenly, Steve busted in the lab and overpowered Rolf.

Back at Nicole’s apartment, Kate reunited Henry with Allie. Nicole fixed martinis for herself and Kate, while Kate told the story of how she got Henry away from Clyde and shot Clyde.

Kate asked for a moment alone with Allie, and Kate revealed that she knew what Tripp Dalton (Lucas Adams) did. Allie blamed herself for the rape, but Kate wouldn’t let Allie go there.

After Kate left, Allie and Nicole talked briefly, and Allie said that tonight it really hit her how much she loved Henry. Nicole reassured Allie that the nightmare was over, and later Allie sang to Henry lovingly.

Back at the police station, Eli told Ben that they got Rolf and that Clyde was in the hospital. Ben wanted to see Clyde, and Eli let Ben leave, telling Ben not to let him regret letting him go. Eli then went into the interrogation room where Rolf sat. Eli gave Rolf one phone call.

At the DiMera mansion, Chad DiMera (Billy Flynn) hung up the phone and told Gwen Rizczech (Emily O’Brien) and Abigail DiMera (Marci Miller) that Rolf was in custody.

Abigail thought that Gwen looked white as a sheet, and then Gwen’s phone rang – it was Rolf, but Gwen covered and took the call in the other room. Rolf wanted Gwen to come to the station and help him.

Gwen made an excuse, saying that a friend of hers needed her, and she took off for the police station. Chad started getting suspicious of Gwen, but Abigail thought that Gwen was a good friend to her. Chad and Abigail decided to wait up for Gwen to return to the mansion.

At the hospital, Steve and Kayla sat in Kayla’s office. The drugs had worn off, and Kayla had already been through the ER. Kayla was very upset, and she said that she hadn’t felt that kind of rage and humiliation since she was raped.

Kayla cried in Steve’s arms, and she said that the whole thing with Allie and Tripp was hard for her.

Kayla wondered if Steve would accept it if the paternity test came back saying that Tripp was Henry’s father. Steve said that he’d have to accept if, and he and Kayla decided to go home and put this horrible day to bed.

Over in Clyde’s room, Ben walked in and Clyde told Ben the whole story of why he took Henry. Ben wasn’t happy with his father, and he griped that God took Ciara Weston (Victoria Konefal) but let someone like Clyde live.

Clyde then offered to take out Vincent Bellman (Michael Teh) for Ben, but Ben refused, saying that he wanted to kill Vincent himself.

Back at the police station, Gwen visited Rolf, who initially wanted her to bust him out of the station. Gwen refused, saying that she could make that ingrate Chad pay by destroying Abigail.

Rolf liked the sound of that, and he said that he’d go back to Statesville and keep Gwen’s secret, but that Gwen needed to do one thing for him.

Finally, in town square, Abe and Kate regrouped, and Kate wondered where her gun was now. Abe said that the Salem PD had it. Kate then fumed about Tripp raping Allie, and she wondered what Abe was going to do about it.

Abe explained that there was a problem with jurisdiction, and that once it was resolved, the DA would look at the evidence. Kate vowed to make Tripp pay.

There’s definitely a lot going on right now on Days of Our Lives, so stay tuned! We’ll be sure to give you updates as DOOL news comes in. Stick with the NBC soap and don’t forget to check CDL frequently for the latest Days of Our Lives spoilers, daily episode recaps, and news.