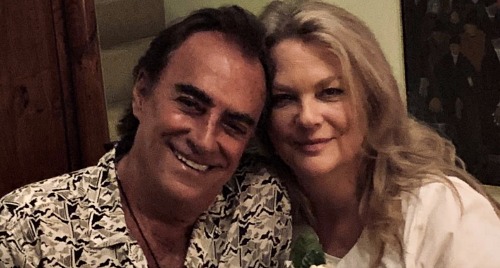 Days of Our Lives spoilers reveal fans were disappointed when Tony DiMera (Thaao Penghlis) and Anna DiMera (Leann Hunley) said goodbye. However, there is something to get excited about as Penghlis confirmed the fan-favorite couple will be back. He shared when viewers can expect to see them come roaring back into the fictional town of Salem.

Tony DiMera and Anna DiMera’s Story is Not Over

DOOL spoilers indicate there is more to Tony and Anna’s story than what we have seen. Post-time jump, Tony was no longer CEO of DiMera Enterprises. Although we have some idea of how Gabi Hernandez (Camila Banus) took over the position, the play-by-play remains a bit murky. That is usually a tell-tale sign that the story has holes that will be filled in later.

As for Anna, she had some descriptive insults when Stefano DiMera (Stephen Nichols via brain chip) was mentioned during their last visit. Of course, she had no clue that Stefano was standing right there and he couldn’t stop himself from lashing out. She just didn’t recognize the villain as he basically stole Steve “Patch” Johnson’s (Stephen Nichols) face.

On Twitter, Penghlis confirmed Tony and Anna are coming back to Salem. Expect to see the pair in March 2020.

This is awfully close to the estimated date that we will see Brandon Barash come back, although we don’t know if it is as Stefan DiMera or someone else. It seems like there is a DiMera family reunion in the works!

“For over 30yrs a closeness developed out of trust & certainly love. We’re back in March. Thank u all for the support.”

Days of Our Lives spoilers suggest some characters had to be removed from the canvas during the time jump. Head writer Ron Carlivati said that there just wasn’t any room for Tony and Anna.

“With so much going on, what we realized is there really wasn’t room for Tony and Anna when we came back after the time jump.”

Now, fans didn’t take this too well, but that is probably the way Carlivati worded his statement. Over the years, we have gotten used to characters, including Tony and Anna, coming and going.

So, what can we expect when Tony and Anna grace our television screens once again? It will probably have something to do with Stefano. Each week, it seems like more Salemites are learning the shocking truth about “Steve-ano,”, so it’s only a matter of time before everyone knows. Tony will definitely come back to face his father.

We might also see some interaction between Tony and Gabi as more details are revealed regarding Gabi’s takeover during the time jump.

Now, what would be really impressive is if Tony and Anna were given a storyline of their very own. Something that would keep them around for a little while. Fans have been quite vocal on Thaoo Penghlis’ Instagram about wanting him back permanently. Are you excited that Leann Hunley and Thaao Penghlis will be returning – we are!  However, whether we get our wish or not remains unclear.

For over 30yrs a closeness developed out of trust & certainly ❤️ love. We’re back in March. Thank u all for the support. #love #romance #Days #NBC #magic #resonate #kindness #vets #compassion #life #survivors