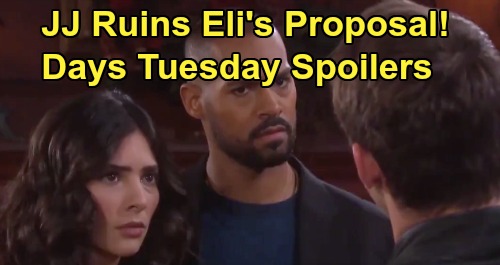 Days of Our Lives (DOOL) spoilers for Tuesday, January 14, tease that Abigail DiMera (Kate Mansi) will make a puzzling discovery. She just showed up at Kristen DiMera’s (Stacy Haiduk) door, but she’s in for a shock when Kristen opens it. Abigail will be taken aback to see her uncle, “Steve Johnson” aka Stefano DiMera (Stephen Nichols), hanging out in Kristen’s room.

DOOL fans can expect Abigail to ask plenty of questions. She’ll want to know what’s going on here, but “Steve” may give the explanation he first offered Kristen.

Before “Steve” revealed the truth, he pretended he was there to seek info that could lead him to Stefano. Abigail may buy that excuse for the most part, but she might remain a little suspicious deep down.

Over with JJ Deveraux (Casey Moss), he’ll learn the whole ugly story of what Gabi Hernandez (Camila Banus) did to Lani Price (Sal Stowers). Days spoilers say JJ will be disgusted over the pacemaker blackmail plot and the threat to Julie Williams’ (Susan Seaforth Hayes) life.

JJ will promise to help Lani get out of this jam, but that means putting a risky plan in motion.

At the DiMera mansion, Days of Our Lives spoilers say Eli Grant (Lamon Archey) will make a bold move. He’ll get down on one knee and ask Gabi to marry him, so she’ll be floored by this sudden proposal.

Of course, there’s a reason Eli’s popping the question right now. He’s clearly rattled by Lani’s return to town and all the feelings it brought rushing back.

Next, Days of Our Lives spoilers say JJ will show up to disable the pacemaker app on Gabi’s phone. He won’t want to tip Gabi off to what he’s doing, so he’ll lie about what he’s there.

JJ will declare that Eli can’t marry Gabi because Lani loves him with all her heart. Eli will definitely be thrown for a loop, so he’ll have a lot to process. As for Gabi, she may worry about how much Lani spilled!

Other Days spoilers state that Chad DiMera (Billy Flynn) will wonder what Kate Roberts’ (Lauren Koslow) game is. Chad’s hoping Kate might be willing to sign over Andre DiMera’s (Thaao Penghlis) shares, but Abigail isn’t so sure Kate will agree. She also suggested that if Kate doesn’t, Kate may have a hidden agenda for them to figure out.

Kate may indeed put up a fight and leave Chad concerned about what she’s hiding from him.  Some bombshells are brewing for Chad down the road, so don’t miss all the action.  We’ll give you updates as other Days news comes in.  Stay tuned to DOOL and don’t forget to check CDL often for the latest Days of Our Lives spoilers, updates and news.