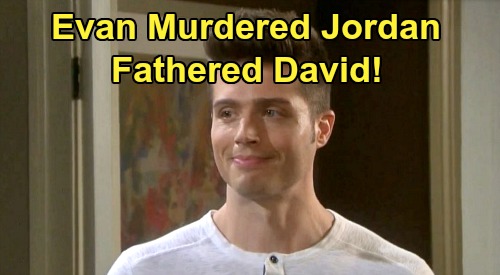 Days of Our Lives (DOOL) spoilers tease that the jig will soon be up for Evan Frears (Brock Kelly). It’s clear that Evan’s got some dark secrets. He may seem innocent on the surface, but things are rarely as they seem in Salem.

We also know Evan lived on the west coast and got out of a very toxic relationship. Jordan lived in California before she headed back to Salem – and any relationship with someone as crazy as her would’ve been pretty toxic!

There’s no official confirmation just yet, but Days insiders insist that Evan is David Ridgeway’s (Caleb and Kyler Ends) father. However, he must have some important reasons for not confessing to Rafe Hernandez (Galen Gering).

In addition to acting funny about Rafe adopting David, Evan seemed nervous about the idea of a background check. What’s in his past that he’s trying to hide?

“Evan Frears” almost certainly isn’t his real name. Jordan insisted that David’s father shouldn’t have anything do with him. Did Evan get abusive or something along those lines? Again, looks can be deceiving. Even seemingly sweet guys can turn into raging monsters when tempers flare.

That could explain why Evan potentially killed Jordan. Maybe he confronted her about keeping David from him and flew into a familiar abusive rage. Whatever the case, Kate Roberts (Lauren Koslow) doesn’t trust Evan and intends to do some digging.

Kate might even get some help from Will Horton (Chandler Massey) after Will gets off the hook. It looks like Ciara Brady (Victoria Konefal) may tell Will that he was framed.

She’ll visit the prison to see Will after Victor Kiriakis’ (John Aniston) confession, so that’ll surely be her goal. That doesn’t necessarily mean Ciara will spill, but she might since Will and Ben have become friends in prison. Ciara can’t save Ben with this info, but she can try to reunite Will and Sonny Kiriakis (Freddie Smith).

Naturally, Days of Our Lives spoilers say a “WilSon” reunion may not be that easy. DOOL fans know there’s emotional distance that may not be fixed by the truth – at least not right away.

Maggie Kiriakis (Suzanne Rogers) actually killed Adrienne Kiriakis (Judi Evans), but Will and Sonny have a lot to repair. Even if Will’s name is cleared, there may be wounds that still need to heal. That could leave Sonny in a position to keep leaning on Evan.

Sooner or later, Days of Our Lives spoilers say Sonny will be horrified by Evan’s true colors. The shocking revelations to come will eliminate Evan as a romantic option.

If Will plays a role in exposing Evan, maybe he could repay Ciara for uncovering the setup and thank Ben for saving his life in the slammer. Bottom line, Evan’s going down and Will’s going to get his happiness with Sonny back.