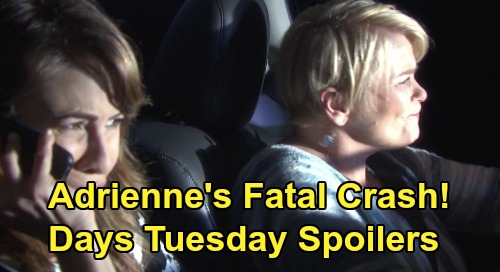 Days of Our Lives (DOOL) spoilers for Tuesday, January 21, tease that a tragic outcome awaits Adrienne Kiriakis (Judi Evans). DOOL fans saw some great flashbacks in Monday’s episode and many more are ahead throughout the week. Burning questions will be answered as the drama revs up.

In additional flashbacks, Days of Our Lives spoilers say Sarah Horton (Linsey Godfrey) will get a ride to the hospital. She just went into labor with Maggie Kiriakis (Suzanne Rogers) by her side, but Maggie won’t take Sarah to the hospital herself. That may be due to Summer Townsend’s (Marie Wilson) imminent arrival.

Maggie mentioned that Summer hadn’t been in touch for quite some time, but she’s set to show up in scenes from last Mother’s Day. Days of Our Lives spoilers say Summer’s visit won’t be a pleasant one for Maggie.

In fact, Maggie will be so upset over their time together that she goes on a drinking binge. She’ll fall off the wagon before getting behind the wheel, so that’s obviously a terrible idea.

Drunk Maggie will cause a crash, which will leave Adrienne with deadly injuries. As for Sarah, she’ll fear for Adrienne as well as her unborn baby. It won’t be long until Xander Kiriakis (Paul Telfer) arrives on the scene – and Will Horton (Chandler Massey) will get caught up in all this, too.

Thanks to Will’s distracted driving, he’ll ultimately be convinced he’s responsible for this horrific accident.

Days of Our Lives spoilers say Xander will also make an admission on Tuesday. He’ll confess to Victor Kiriakis (John Aniston), so that might involve a call about Maggie’s actions or perhaps the true paternity of Sarah’s baby.

Whatever the case, Xander and Victor’s twisted alliance will get more twisted by the second! DOOL viewers will see the story behind Will’s setup and the baby switch later this week.

Until then, Days spoilers say flashbacks will reveal Anna DiMera’s (Leann Hunley) betrayal. She’ll be disloyal to Tony DiMera (Thaao Penghlis) somehow, so he should give her an earful about that! It looks like this disloyalty will cause a crisis – one that Tony and Anna will have to tackle together.

Another gripping episode’s coming up, so stay tuned for all the mayhem. We’ll give you updates as other Days news emerges. Stay tuned to DOOL and don’t forget to check CDL often for the latest Days of Our Lives spoilers, updates and news.