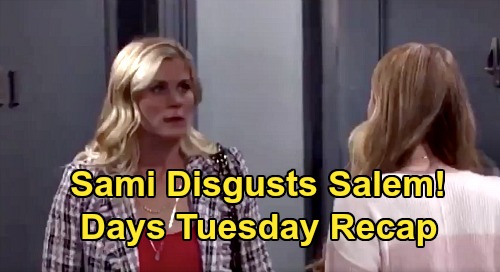 Allie asked what Sami meant when she said that Allie “couldn’t know about it,” but Sami claimed that she was talking about Claire Brady (Olivia Rose Keegan) being cleared in the church bombing.

Allie got rid of Sami for a moment, then told Lucas that she was going back to Nicole Brady (Arianne Zucker) and Eric Brady’s (Greg Vaughan) apartment. Allie took off, and Sami returned, upset that Allie was pushing her away.

Sami and Lucas spoke about how Sami pressured Rafe Hernandez (Galen Gering) not to adopt Allie’s baby. Lucas said he wouldn’t mention anything about it to Allie, pleasing Sami.

Lucas then learned that Will Horton (Chandler Massey) also knew about Sami’s interference, and he suspected that this whole thing would blow up in Sami’s face. Meanwhile, Eric and Nicole returned to their apartment, fresh back from their honeymoon.

After making love, Eric gave Nicole a present – some earrings, which she loved. Soon, Allie showed up and filled in Nicole and Eric about the church bombing and about how Rafe turned down her adoption offer. Nicole seemed surprised that Rafe turned Allie down, then she went out to pick up food for the three of them.

At the police station, Will and Rafe continued their talk about Ben Weston (Robert Scott Wilson), and they realized together that maybe Ben was kidnapped from the church.

Over at the Salem Inn, Ciara Weston (Victoria Konefal) had a nightmare that Hope Brady (Kristian Alfonso) told her that Ben had died. Later, Hope comforted Ciara, telling her that Claire had been cleared in the explosion. Ciara absorbed that information carefully.

Soon, Rafe showed up to ask Ciara about Clyde Weston (James Read). Ciara learned that Rafe was going to go question Clyde, and she said that she should do it because Clyde would be more apt to talk with her.

At the Kiriakis mansion, Will arrived to find Sonny Kiriakis (Freddie Smith) there. Will got Sonny caught up on how Claire was cleared in the explosion, and later Will and Sonny got the adoption papers delivered to them.

Will and Sonny took off to go find Allie to get her to sign the papers, and they found her at Nicole and Eric’s apartment. Allie seemed shocked to see the adoption papers, and she agreed to look them over.

In town square, Nicole had just picked up takeout when she bumped into Rafe. Nicole cornered Rafe, saying that she was surprised that Rafe turned down Allie’s offer. Nicole quickly realized that Sami had strong-armed Rafe into turning Allie down.

Nicole was furious with Sami, but Rafe didn’t have time to discuss it further, since he was working on the bombing investigation.

At Statesville, Clyde got a visit from Ciara and he immediately asked about Ben. Ciara filled Clyde in on what happened at the wedding, and she said that Ben was missing.

Clyde seemed genuinely horrified, and he said that his wedding present for Ben and Ciara was money to help them get started in life – not a bomb. Clyde thought that perhaps Ciara was the target, not Ben.

Ciara mulled that suggestion over, and then Clyde suggested that it could be Orpheus (George DelHoyo) who set the bomb, as revenge against Ciara for getting the murder confession out of Evan Frears aka Christian Maddox (Brock Kelly). Ciara wanted to talk to Orpheus, but Clyde said that Orpheus wasn’t there at the prison.

Will and Sonny arrived back at the Kiriakis mansion, happy about Allie’s decision to let them adopt her baby. Will busted out the champagne, and “WilSon” toasted happily.

Back at the police station, Rafe was barking orders to someone on the phone when Sami walked in to see him. Rafe said he was busy, but Sami insisted on talking. Sami said that Allie couldn’t know that she had anything to do with his decision to turn down the adoption offer.

Nicole arrived back at the apartment just as Allie was telling Eric that she was ready to sign the adoption papers naming Will and Sonny the parents. Nicole seemed surprised by this, and she said that before Allie signed anything, there was something she needed to know.

Finally, in some warehouse, Ben woke up tied to a chair, still in his wedding attire and with a gash on his head.

“At least have the guts to show your face, you bastard!” And with that, the door opened, and Ben looked into the light emanating from the doorway.

There’s definitely a lot going on right now on Days of Our Lives, so stay tuned! We’ll give you updates as DOOL news comes in. Stick with the NBC soap and be sure to keep CDL at the ready so you don’t miss any of the hot new DOOL spoilers and news.