Days of Our Lives Spoilers: Tuesday, June 30 Recap – Whatever Can Go Wrong, Does Go Wrong! 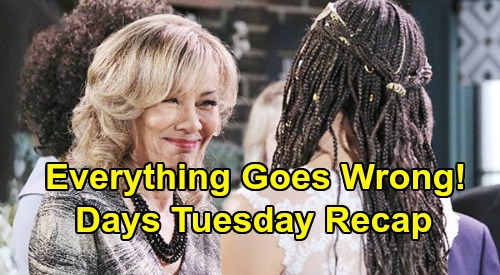 Days of Our Lives (DOOL) spoilers recap for Tuesday, June 30, reveal that Gabi DiMera (Camila Banus) needled Chad DiMera (Billy Flynn) in town square, gloating about her not guilty verdict. Chad complained that the jury was corrupted, while Gabi insisted that Wilhelm Rolf (William Utay) set her up. Gabi said that she was coming after DiMera again, and that she and Stefan DiMera (Brandon Barash) were going to reclaim the company together. Chad looked rattled.

At Julie’s Place, Tamara Price (Marilyn McCoo) regrouped after her fainting spell, explaining that she’s fine – her blood sugar was just low. Tamara insisted that Lani Price (Sal Stowers) and Eli Grant (Lamon Archey) continue their ceremony, even though she was going back to the hotel to rest.

Marlena Evans (Deidre Hall) proceeded with the ceremony, saying some touching words about marriage. Julie Williams (Susan Seaforth Hayes) blurted out something about Gabi not ruining the ceremony, much to Eli’s chagrin.

Julie regrouped, and ended up saying a few words about Eli and Lani’s love and sort of redeemed herself, but then Gabi marched in the place, much to everyone’s horror.

Gabi gloated that she was free, even though both Lani and Eli testified against her. Abe Carver (James Reynolds) pointed out that Lani and Eli also saved Gabi’s life when she was held captive by the mob.

Lani looked really peeved, and Eli slammed Gabi, telling her to leave. Julie opened the door, and Gabi finally marched out. Lani sat down and got a drink of water, trying to calm herself and steady her nerves.

Abe went to lock all the doors to the restaurant, and the ceremony got underway again. Julie read an inspirational poem that Tom Horton (MacDonald Carey) had once read to her. Everyone was touched by the words, and then Marlena started again.

Nobody objected to the union, and Lani said a few words, explaining that she wasn’t sure she and Eli would make it here, but they did.

Julie told Lani and Eli that they were blessed and said a few more nice words. Marlena chimed in that there would be no more negativity, and suddenly everyone heard the sound of glass breaking coming from the kitchen. Everyone looked startled.

At the Hernandez house, Hope Brady (Kristian Alfonso) arrived to see Rafe Hernandez (Galen Gering) with a pizza to share. Rafe and Hope talked about Rafe’s first video chat with David Ridgeway (Kyler Ends), and about how he ironed Eli’s wedding outfit.

Hope shared that she had decided to accept the key to the city, and they briefly talked about Allie Horton’s (Lindsay Arnold) pregnancy.

Rafe said that Sami Brady (Alison Sweeney) didn’t know about Allie’s pregnancy, and the mention of Sami brought up some bad memories for Rafe and Hope. Hope said that was in the past, and that she and Rafe were friends now. Hope and Rafe hugged happily. Gabi then barged in to see Rafe.

Hope quickly left, and Gabi pressed Rafe to see if something was going on between him and Hope, but Rafe said no. Gabi then got a call from the hospital lab saying that Jake Lambert’s (Brandon Barash) DNA test results would be in within the hour.

At the Park, Kristen DiMera (Stacy Haiduk) turned around and was reunited with Brady Black (Eric Martsolf) in an emotional moment. Brady was dismayed to learn that Kristen had returned to see Lani, not him.

Kristen explained that she couldn’t bear to say goodbye to him again. Brady and Kristen kissed passionately, then talked about Rachel Black a bit, until Chad came along and spied Kristen.

Chad said that he wouldn’t turn Kristen in, but that there was something he needed from her – her shares of DiMera Enterprises. Chad explained that Gabi was a threat again, and that if Jake was Stefan, then there would be a big fight for DiMera.

Chad said that he had Kate DiMera’s (Lauren Koslow) shares, and that with Kristen’s shares he could consolidate power. Kristen agreed and said that her lawyer would be in touch.

Chad left, and Kristen said that she needed to leave before anyone else saw her. Kristen went to leave, but Brady grabbed her hand and said, “I’m going with you.” Kristen protested, but Brady said that he needed to be with her and Rachel right now. Brady and Kristen kissed and left the park together hurriedly.

At the DiMera mansion, Chad walked in and looked at Stefano DiMera’s (Joseph Mascolo) portrait on the wall. Chad said out loud that he can’t let Gabi take anything else from this family, and he wondered why he wanted it to be Gabi who had drugged Abigail DiMera (Kate Mansi).

Chad said that maybe he couldn’t face the alternative – that Stefano might have ordered someone to drug Abigail. “You wouldn’t do that to your own son, would you, Dad?” Chad asked the portrait.

Back at Julie’s Place, Julie said that she’d go check out the noise of glass breaking in the back room. Julie thought it sounded like her good plates hitting the floor. “I know a clumsy caterer when I hear one,” Julie said. Suddenly Vivian Alamain (Louise Sorel) emerged from the kitchen, saying, “Who are you calling clumsy?”

Everyone gasped as they saw Vivian. Vivian said that she wasn’t invited to the wedding, so she had to crash. The camera then zoomed in on a horrified Lani and Eli.

That was a great episode of Days of Our Lives, and there’s plenty more coming this week, so be sure to stay tuned! Stick with DOOL and remember to keep CDL bookmarked so you don’t miss any of the hot DOOL spoilers, daily recaps, or news.