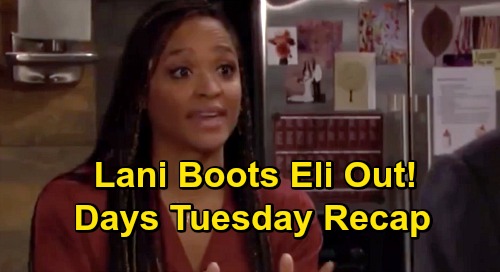 Days of Our Lives (DOOL) spoilers recap for Tuesday, November 17, reveal that Kristen DiMera (Stacy Haiduk) brushed off Brady Black’s (Eric Martsolf) questions about her prior visitor at Statesville before telling her the whole story about his visit with Lani Price-Grant (Sal Stowers).

Brady told Kristen about how Lani got him to tell her why Kristen confessed to Victor Kiriakis’ (John Aniston) kidnapping.

Kristen was upset, and she hoped that Lani and Eli Grant (Lamon Archey) would be able to work things out. Brady then showed Kristen pictures of Rachel Black, and Brady took off.

Meanwhile, over at Lani and Eli’s apartment, Lani was furious as Eli resisted admitting to what he did. Finally, Lani admitted that she had a recording of Eli and Abe Carver (James Reynolds), and Eli said that he wasn’t sorry for what he did.

Eli insisted that Melinda Trask (Tina Huang) gave him no choice, and that it was either Kristen or Lani who went to prison, and he chose Kristen. Lani fumed that Eli didn’t tell him the truth when Kristen confessed to Victor’s stabbing, and Eli fumed that Lani was so loyal to Kristen.

Lani packed her bags and nearly left, then she changed her mind and said that Eli should be the one to go. Eli left, saying that this was wrong, but Lani insisted that he go.

At the DiMera mansion, Abigail DiMera (Marci Miller) woke up hungover as Chad DiMera (Billy Flynn) handed her some coffee. Chad griped about finding her with Jake Lambert (Brandon Barash) the night before, and he was more upset to hear that Jack Deveraux (Matthew Ashford) had given Abigail grief.

Chad mentioned that Gwen Rizczech (Emily O’Brien) had tried to stop Abigail from drinking the night before, which surprised Abigail.

Down in the living room, Kate DiMera (Lauren Koslow) and Jake kissed right as Gwen walked in. Kate and Gwen immediately started arguing over who was to blame for last night’s family blowup – Kate or Abigail.

Kate took off, and Gwen needled Jake about sleeping with Kate. “Chad can’t know about this,” Jake said, right as Chad walked in.

Jake covered, saying that he didn’t want Chad to know that he called Li Shin (Remington Hoffman) to get his rightful place in DiMera Enterprises. Jake then badgered Chad about having comforted Abigail the night before, and he took off.

At the Salem Inn, JJ Deveraux (Casey Moss) returned to his room where Jennifer Deveraux (Cady McClain) was brooding. JJ had gone to the mansion to get some of Jennifer’s things, and it turned out that Jack followed him back.

Jack knocked on the door, but JJ wouldn’t let him in, as Jennifer didn’t want to talk to Jack. JJ then comforted his mother.

As Jack walked out of the Salem Inn, he encountered Kate, and they went off to the park to talk. There, Jack asked why Kate had kept his letter, and she said that it was because he said in the letter that she helped him and that the evening meant something to him.

Kate offered to talk to Jennifer, but both Kate and Jack realized that that was a terrible idea. Jack took off.

In Jake’s workshop, Abigail stopped in to tell Jake that she was sorry for passing out in his lap the evening before. Jake said that Chad overreacted, like he always seems to do.

Later, Chad arrived to see Jake, saying that he called Li’s assistant, and that there was no record of Jake leaving a message there. “So, what were you and Gwen really talking about?” Chad asked.

Back at the DiMera mansion, Gwen stood alone in the living room and told Stefano DiMera’s (Joseph Mascolo) portrait that she was off to see an old friend of his. “It’s time for me to start phase two of my plan,” Gwen mused.

Back at the Salem Inn, Abigail arrived at JJ’s room to see Jennifer, but JJ said that Jennifer was gone. Jennifer turned up in the park, where she encountered Kate. “Going somewhere?” Jennifer asked Kate.

What a great episode of Days of Our Lives – there’s plenty more coming tomorrow, so stay tuned to the NBC soap! Remember, CDL is your go-to source for all the latest Days of Our Lives spoilers, updates, and news. We’ve got you covered!