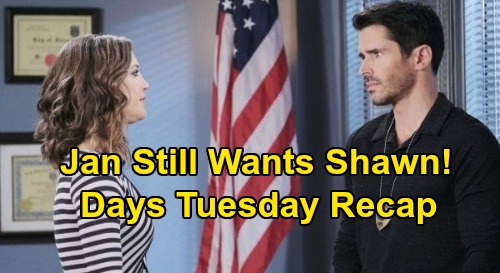 Victor was hoping to talk with Hope, but Shawn explained that she and Ben Weston (Robert Scott Wilson) were out trying to track down Vincent Bellman (Michael Teh).

Victor was stunned to learn that Hope thought Ciara Weston (Victoria Konefal) might still be alive, and Shawn noted that losing two children was simply too much for Hope to bear, so he hoped that she was right, and that Ciara would be found.

Talk then turned to Philip Kiriakis (Jay Kenneth Johnson) and the fact that Jan Spears (Heather Lindell) was walking free.

Over at the Kiriakis mansion, Maggie Kiriakis (Suzanne Rogers) visited with Philip ahead of the dinner party to welcome Philip home. Philip was dismayed to learn that Xander Kiriakis (Paul Telfer) was invited to the dinner party, and he and Maggie proceeded to disagree about Xander.

Philip said that Xander was an idiot who was totally out of his league, and Maggie didn’t appreciate that.

Maggie stood up to Philip, and she told Philip that he and Xander needed to get along for Victor’s sake. But Philip said that he wouldn’t stand for a thug stealing what’s rightfully his, and he chided Maggie for being on “team Xander.”

Maggie then told Philip the story of how Xander saved her life in prison when she tried to take her own life, and she warned Philip to try to get along with Xander, because Xander wasn’t going anywhere.

Sarah went off to shower, and Xander talked with Jan, who informed Xander that she decided to report Philip’s threat to the police, since she could use it to her advantage to get Shawn for herself. Xander thought that sounded convoluted, but he was happy that Jan was going to follow through.

At Nicole Brady’s (Arianne Zucker) apartment, Allie Horton (Lindsay Arnold) thought that Tripp Dalton (Lucas Adams) couldn’t be the guy she met in London, since that would be way too much of a coincidence.

Nicole went to the computer and googled Tripp’s name, and Allie looked at a picture and said that’s him. Allie immediately wanted a drink, but Nicole said that wasn’t a good idea, and that keeping all of this bottled up inside had to be hard on Allie.

Allie then sat down with Nicole and started telling her the story of meeting Tripp. Allie said that she was in a club and Tripp came up to her and she turned him down when he asked her for a dance.

Then, the club got more crowded and Tripp asked for another dance, and this time Allie said yes, and that she thought it was a slow dance, but that she was pretty intoxicated.

Allie described herself as stumbling all around and nearly falling once. Allie said that it was all kind of a blur, but that she did remember that Tripp asked her if she wanted him to take her home, and she said yes.

When Nicole asked what happened next, Allie shut down and said that they slept together, and she got pregnant – end of story. Allie then went to bed in a huff, and Nicole seemed suspicious, as if there was more to the story.

At the hospital, Tripp seemed surprised to learn from Steve Johnson (Stephen Nichols) that Allie had been pregnant when she came to Salem, and that she had a baby. Steve did the math, and he asked if Tripp could be the baby’s father.

Suddenly, Claire Brady (Isabel Durant) interrupted them, saying that she wanted to put a memorial together for Ciara, in case Hope didn’t find her alive.

Steve was surprised to hear that Hope thought Ciara might be alive, and he quickly learned that Hope and Ben were off searching for Vincent. Tripp offered to help Claire with her preparations for the memorial, but Steve said that they needed to finish their conversation.

Tripp said it could wait, and he took off with Claire, leaving Steve to ponder the whole question of Henry Horton’s (Parker and Delaney Evans) paternity.

Back at the police station, Shawn was in Hope’s office alone when Jan walked in. After bickering with Shawn about the need for Jan to leave his family alone, Jan said that she was there to report a crime.

Jan disclosed how Philip grabbed her arm and threatened her life, and Shawn refused to take it seriously. But Jan insisted that Shawn do his duty as a cop.

In town square, Tripp and Claire sat and looked at photos from Ciara’s wedding. Soon, they came to a photo of Allie, and Claire explained that Allie was her cousin and that she was pregnant in the picture.

Claire schooled Tripp about how Allie had a big fight with Sami Brady (Alison Sweeney) over giving her baby up for adoption.

Tripp disclosed to Claire that he had met Allie, and before he could explain, Jan came along. Tripp took off, and Jan sat with Claire, saying that she wanted to talk about Shawn.

Jan said that she wanted to explain that she went to see Shawn on official police business, even though Claire’s parents would probably say that she was stalking Shawn.

Back at the Kiriakis mansion, Victor, Maggie, and Philip toasted to Philip’s homecoming. Philip ran a proposal for Titan by Victor, and Victor said that he needed to get Xander’s take on the proposal.

Philip was irked, and soon Xander and Sarah appeared. Xander took a look at the proposal and said that he was hesitant about it, and Philip exploded.

Philip grumbled some more, and then Shawn walked in to take Philip to the station for questioning. Xander looked amused, as Shawn explained that Jan made an outcry against Philip, saying that Philip grabbed her arm and threatened to kill her.

Philip then admitted that he did it, but that it was just a figure of speech. Shawn said that because Philip admitted the assault, he had to be cuffed and hauled into the station. Philip blustered as Shawn took him out of the house.

Xander offered to call the lawyer on Victor’s behalf to represent Philip, and when Xander stepped out of the room, Sarah followed. “You were behind this, weren’t you?” Sarah fumed.

Finally, at Kayla Brady (Mary Beth Evans) and Steve’s place, Tripp sat alone and flashed back to meeting Allie in the park and Allie slapping him. Tripp looked deep in thought and worried.

That was a fantastic episode of Days of Our Lives and there’s much more coming this week, so stay tuned! Stick with the NBC soap and remember to keep CDL at the ready so you don’t miss any of the latest Days of Our Lives spoilers, daily episode recaps, and news.