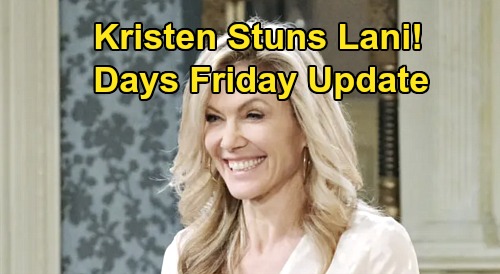 Ciara wrestled with this decision, but she ultimately felt like it was the right thing to do. It’s a complicated situation, but Ciara knows it’s possible for a person to overcome mistakes. Ben got the help he needed, so Ciara’s trying to trust that Claire did, too.

Since Ben and Ciara won’t be on the same page, that’ll lead to a minor argument on Friday. Days spoilers say Ben will warn Ciara that this could spell trouble, but Ciara won’t budge. It sounds like Ben will just have to roll with it despite the Claire alarm bells!

Meanwhile, Lani Price (Sal Stowers) will find out who’s been spying on her around Salem. Kristen DiMera (Stacy Haiduk) will show up on Lani’s doorstep wearing her nun disguise. You’d think that’d just make Kristen stand out, but she was somehow able to avoid detection anyway.

Days of Our Lives spoilers say Lani will freak over Kristen putting her freedom on the line. After Lani warns that Kristen could land in prison, Kristen will argue that she couldn’t stay away.

Lani is Kristen’s closest friend, so Kristen felt like she should come and wish her pal well. It’ll be the morning of Lani and Eli Grant’s (Lamon Archey) nuptials, so Kristen will have a little wedding gift to deliver.

Although Lani will have concerns about Kristen’s sneaky visit, she’ll appreciate having this special girl time. While Kristen and Lani talk, Eli will get some bonding scenes with Rafe Hernandez (Galen Gering). Days of Our Lives spoilers say Rafe will speak from the heart and leave Eli grateful that they’re buddies.

As for Gabi Hernandez DiMera (Camila Banus), she’ll have a lot on her mind. DOOL fans know Gabi was set up by Dr. Wilhelm Rolf (William Utay) and his secret accomplice, so Gabi’s innocent of the charges against her. Will the jury be able to see that?

On Friday, a nervous Gabi will await her fate and hope she’s declared “not guilty” in court. Days spoilers say Gabi’s verdict will officially drop by Monday – and she’ll be strutting around Salem the rest of the week.

That can only mean Gabi’s name will be cleared, so you can bet Chad DiMera (Billy Flynn) will be furious. As other Days news comes in, we’ll bring you more updates.

DOOL spoilers say Gabi still has some drama in her future, so don’t miss all the action. CDL’s your hotspot for fantastic Days of Our Lives spoilers, updates and news posts.