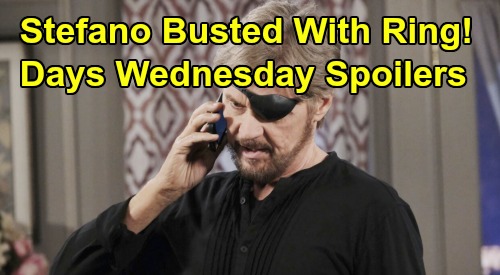 Days of Our Lives (DOOL) spoilers for Wednesday, January 29, tease that “Steve Johnson” aka Stefano DiMera (Stephen Nichols) will spark questions. Anna DiMera (Leann Hunley) just wouldn’t stop dragging Stefano’s name through the mud, so “Steve” finally had enough. He told Anna to shut up and earned some surprised looks from everyone around the table.

On Wednesday, “Steve” will have to do a little damage control. Anna, Tony DiMera (Thaao Penghlis) and John Black (Drake Hogestyn) will all wonder why “Steve” would blow his top at Anna like that.

They’ll also be curious why Anna’s Stefano trash-talking bothered him so much, but “Steve” will manage to smooth things over.

“Steve” will pretend he’s just stressed about the leads that haven’t panned out. Of course, there’s a good reason they haven’t! “Steve” and John have been galivanting across Prague searching for Stefano, but Stefano himself is sitting at that table with the others.

He’ll end up getting into another argument with John after all the Anna drama, so Stefano’s charade isn’t going well at the moment.

“Steve” will face a different snag later when John finds Stefano’s ring. Days of Our Lives spoilers say John will stumble across it in “Steve’s” bag and wonder why his best bud has it.

“Steve” will insist he secured it from Kate Roberts (Lauren Koslow) to help with their mission. He’ll claim it’s part of Stefano’s identity and could be used as bait, so that’ll satisfy John for the time beng.

Back in Salem, DOOL fans can expect Princess Gina Von Amberg aka Hope Brady (Kristian Alfonso) to get grilled. Kate just showed up demanding answers, but she may not get very many.

Princess Gina will likely remain cagey about exactly what she has in store for Marlena Evans (Deidre Hall). There’s never been much trust between Kate and Princess Gina – and rightly so!

Nevertheless, Days spoilers say Kate’s concerns will grow after sparring with Princess Gina. This will set up Kate’s confession to someone later this week, so she’ll certainly be rattled. She’ll realize both Marlena and John could be in grave danger.

Other Days of Our Lives spoilers say Chad DiMera (Billy Flynn) will launch an interrogation of his own. He’ll corner Kristen DiMera (Stacy Haiduk) and try to learn more about her recent meeting with Stefano.

It shouldn’t take Chad long to realize Kristen’s keeping secrets just like their father. Chad will get fed up over being out of the loop and will push for his own meeting, but that’s not happening just yet.

It sounds like Chad will have to be patient or get sneaky if he wants to see Stefano in the flesh! We’ll give you updates as other Days news comes in. Stay tuned to DOOL and don’t forget to check CDL often for the latest Days of Our Lives spoilers, updates and news.