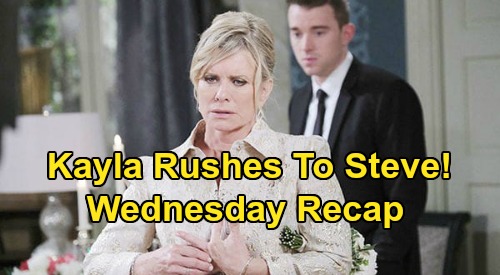 Days of Our Lives (DOOL) spoilers recap for Wednesday, July 8, reveal that Steve Johnson (Stephen Nichols) sat with Hope Brady (Kristian Alfonso), Marlena Evans (Deidre Hall), and John Black (Drake Hogestyn) at the Brady Pub. Steve insisted that he was leaving for an undercover mission in Europe, and that he had a flight to Washington DC all lined up. John was peeved, knowing that if Steve went on this mission that he’d never see Steve again.

Hope and Steve headed to Hope’s house, where Steve packed up his stuff. Steve said he’d miss Hope, and he urged her to get on with her life and find love. Hope and Steve hugged tenderly. Meanwhile, back at the pub, Marlena did her best to cheer up John, who was distraught over Steve leaving. John said that he was thinking about Bo Brady (Peter Reckell), who once went off like Steve is doing, and when he came back, he was dying. Marlena felt for John, then eventually got his mind off of his troubles.

At the Kiriakis mansion, Kayla Brady (Mary Beth Evans) was stunned by Justin Kiriakis’ (Wally Kurth) words. Justin said that he’d love nothing more than for the wedding to continue, but that Kayla needed to know the truth. Justin disclosed that he overheard Jennifer Deveraux (Melissa Reeves) and Hope talking earlier, and that Steve really wanted Kayla back. Kayla was rattled, and she tried to insist that it didn’t matter, but Justin said that it did matter.

Justin revealed that Steve had been about to make his feelings known when Justin proposed, and Kayla was stunned. Kayla was also mad that nobody had told her about all of this, but she eventually realized that it was all Steve’s doing, and that he swore everyone to secrecy. Kayla was horrified to realize that Hope, Jennifer, Jack Deveraux (Matthew Ashford), and Justin knew Steve’s secret and didn’t tell her, but she ultimately blamed Steve.

Justin teared up and told Kayla tenderly that he wanted her to be happy, and that as her dear friend he couldn’t stand in the way of her and Steve. Victor Kiriakis (John Aniston) looked peeved about the whole thing, while everyone else appeared to be sad and touched by what Justin was doing. Justin said that there would be no wedding today, and Kayla said that Justin meant so much to her and that she never wanted to hurt him like this. Justin said that he knew.

Justin kissed Kayla, then left. Kayla touched the guitar by the fireplace and took off her engagement ring, getting angry about Steve’s actions. Kayla seethed that if Steve had just been honest with her, this never would have happened, and Justin wouldn’t have ended up hurt. Jennifer said that Kayla belonged with Steve, and that she needed to go talk with him. Kayla took off to go track down Steve.

At Kayla’s apartment, Justin looked disheveled as he packed up his things in boxes. Sonny Kiriakis (Freddie Smith) walked in telling his dad that he didn’t need to do this now, but Justin was determined to vacate the apartment so that he and Kayla didn’t have another gut-wrenching encounter. Sonny helped his dad, picking up some vinyl albums and prompting Justin to reminisce about taking Kayla to a jazz festival. Sonny told his dad that he was proud of him, and the two men hugged.

After everything was packed up, Justin found the photo from Kayla and Steve’s first wedding and looked at it sadly. Sonny said that the photo probably wasn’t what Justin needed to see right then, but Justin said he understood – after all, he’d never dream of giving up any of Adrienne Kiriakis’ (Judi Evans) pictures. Sonny exited, and Justin put the photo on the side table, then broke down crying before he left.

Back at Hope’s place, Kayla burst in and told a very surprised Hope about how the wedding was off. Kayla wanted to know where Steve was, and Hope said that he left for Washington DC on a secret mission. Hope urged Kayla to get to the airport immediately to stop Steve. Hope called Steve and left a message saying, “Whatever you do, don’t get on that plane.”

At the airport, Steve left Jack a message saying goodbye and to keep an eye on Kayla for him, even though he knew Kayla was going to be happy with Justin. Hope’s call came in, and Steve ignored it. Steve hesitated in getting on the plane, telling the gate agent that Salem was his hometown, but that he had to leave. Steve walked to the ramp to go get on the plane.

Back at Hope’s place, Jack and Jennifer rushed in, and Hope filled them in on where Kayla was, and how Steve was at the airport leaving on a secret mission. Jack was horrified, then he looked at his phone and played Steve’s message on speakerphone. Jack, Jennifer, and Hope looked at each other tensely.

Back at the airport, Kayla rushed in to stop the plane from taking off, but the gate agent told her that she couldn’t go down the ramp without a ticket and an ID. Kayla rushed off to buy a ticket.

At the Kiriakis mansion, Sonny came in and found Will Horton (Chandler Massey). Will asked where Justin was, and Sonny said that he needed some time alone. “I have a pretty good idea where he went,” Sonny said. Meanwhile, at the cemetery, Justin sat next to Adrienne’s grave and told her what happened with Kayla. Justin told Adrienne’s spirit that he understood what Kayla was going through – after all, if he found out that Adrienne was alive, he wouldn’t stop until he found her. Justin turned around and Bonnie Lockhart (Judi Evans) walked up. “Adrienne!” Justin exclaimed.

Finally, at the airport, Kayla rushed back to the gate with her ticket, but the gate agent informed her that the plane had left the gate already – it was too late. Kayla flopped down in a chair and said, “No, no, no!” But then Kayla looked up and there was Steve, who had just walked off the ramp and back into the airport. Steve and Kayla looked at each other, each in shock.

That was a terrific episode of Days of Our Lives, and there’s much more coming up this week, so stay tuned! Stick with the NBC soap and don’t forget to check CDL often for the latest Days of Our Lives spoilers, news, and daily recaps.