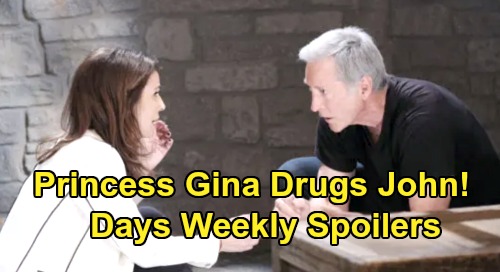 Days of Our Lives (DOOL) spoilers for the week of February 3-7 tease some stunning moments are ahead in Salem. For starters, Xander Kiriakis (Paul Telfer) will be taken aback by the sight of Eric Brady (Greg Vaughan) with Sarah Horton (Linsey Godfrey). They’ll be in a compromising position, so it sounds like Xander will walk in on their lip lock.

However, it’ll soon become clear to Xander that Eric was the one who initiated this – and Sarah wasn’t into it. She’ll profess her love for Xander, which will leave him over the moon.

Later, Xander will set the mood for romance and enjoy a little date night with Sarah. They’ll get lovey-dovey, but DOOL fans know the countdown’s on for when the baby swap will be revealed.

In the meantime, Nicole Walker (Arianne Zucker) will have a confession to make. She’ll divulge the truth about her relationship with Brady Black (Eric Martsolf), so Eric will learn it’s all a ruse to fool Kristen DiMera’s (Stacy Haiduk).

Once Eric’s brought up to speed, he’ll forgive Nicole for her paternity deception and agree to move back in the apartment.

As for Brady, he’ll grow closer to Kristen and let himself indulge in a steamy kiss. Princess Gina Von Amberg aka “Hope Brady” will try to pull John Black (Drake Hogestyn) closer as well, but she’ll got to extremes.

After comforting John over Marlena Evans’ (Deidre Hall) “death,” things will go awry. In a desperate attempt to get what she wants, Princess Gina will drug John and kick this plot up a notch.

Rafe Hernandez (Galen Gering) and Roman Brady (Josh Taylor) will make the trip to Prague, where an urgent hunt will get underway. They’ll believe Princess Gina and Marlena are somewhere in the area by then, so they’ll search high and low.

Next, Days spoilers say Ciara Brady (Victoria Konefal) will beat herself up. She’ll be disheartened over the whole Ben Weston (Robert Scott Wilson) situation and her inability to help him. Ben certainly won’t blame Ciara, but that won’t stop her from blaming herself.

Fortunately, Days of Our Lives spoilers say a new lead will be a game-changer. Ciara will stumble across a clue, so she’ll be able to speculate about Jordan Ridgeway’s (Chrishell Stause) real killer.

At Statesville, Clyde Weston (James Read) will pressure Ben to join his prison break. Their looming escape could give Ciara time to fully crack the case.

Will Horton (Chandler Massey) will help Ben and Clyde put their plan in motion, so it’ll be interesting to see how it works out for them. Finally, Chad DiMera (Billy Flynn) and Abigail DiMera (Kate Mansi) will have some questions for Kristen. They’ll grill her about “Steve’s” portrait, which is strikingly similar to Stefano’s.