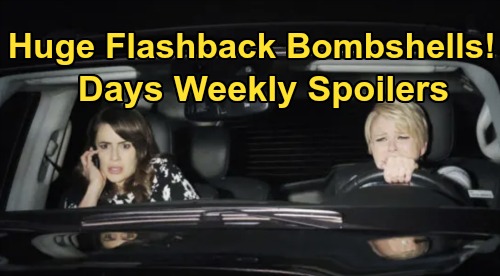 Days of Our Lives (DOOL) spoilers for the week of January 20-24 tease that some can’t-miss episodes are coming up. This is the week many DOOL fans have been waiting for! Five special flashback-filled shows are on the way – and each one will reveal plenty of bombshells about that “horrible night.”

For starters, Maggie Kiriakis’ (Suzanne Rogers) past comes back to haunt her on Mother’s Day. Summer Townsend (Marie Wilson) shows up at Maggie’s door and leads to a drinking binge that changes everything.

Later, Xander Kiriakis (Paul Telfer) finds Maggie passed out behind the wheel of her car with an empty liquor bottle. He can see that she’s caused a horrific accident involving Adrienne Kiriakis (Judi Evans) and Sarah Horton (Linsey Godfrey). Will Horton (Chandler Massey) ends up at the wrong place at the wrong time and gets framed for that accident, which Maggie has no memory of.

As for Adrienne, Days of Our Lives spoilers say her death hits her loved ones hard. DOOL fans can expect some tearful goodbyes from Justin Kiriakis (Wally Kurth), Sonny Kiriakis (Freddie Smith) and Jack Deveraux (Matthew Ashford) in the week ahead.

Meanwhile, Sarah’s baby is delivered by Xander before being taken to the hospital. After her child dies, Victor Kiriakis (John Aniston) and Xander add to that “sordid story” they’ve talked about. Setting up Will was just the beginning! Days spoilers say Xander switches Sarah’s dead baby for Kristen DiMera’s (Stacy Haiduk) on Victor’s orders.

The shock and pain of losing her baby sends Kristen flying off the handle, so she shoves Haley Chen (Thia Megia) down a flight of stairs. JJ Deveraux (Casey Moss) is informed of Haley’s death later by Abigail DiMera (Kate Mansi) and promptly breaks down.

Over with Tony DiMera (Thaao Penghlis), he faces a startling betrayal. Anna DiMera (Leann Hunley) stabs Tony in the back somehow, but it seems they sort it out. Tony and Anna end up leaving Salem soon after, but they may take a few secrets with them.

Of course, there’ll also be some moments beyond those flashbacks. Days of Our Lives spoilers say Sonny will fill Justin in on his divorce from Will. There’ll also be a time of reflection for Kristen and Sarah while Victor discovers something Xander’s been hiding.

Finally, Days of Our Lives spoilers say Ciara Brady (Victoria Konefal) will tell Will he’s innocent. She’ll floor Will by confessing that he was framed! It sounds like a great week’s ahead, so don’t miss what’s in store. We’ll give you updates as other Days news comes in. Stay tuned to DOOL and don’t forget to check CDL often for the latest Days of Our Lives spoilers, updates and news.