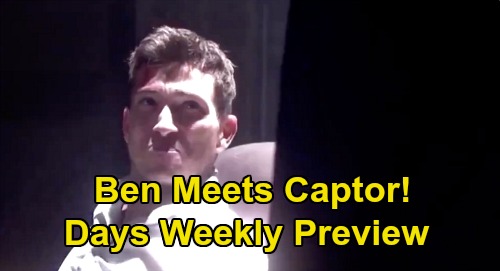 Days of Our Lives (DOOL) spoilers preview teases that the week of July 27th will be an exciting one. Who can forget that Ciara Brady Weston (Victoria Konefal) and Ben Weston’s (Robert Scott Wilson) wedding literally exploded, leaving Ben missing and Ciara beside herself with worry?

Or that Ben ended up alone and unconscious somewhere far away from the church afterwards? Well, during the week of July 27th, viewers will find out exactly what happened to Ben and who’s behind the church bombing.

The new DOOL promo for the week of July 27th shows Ben alone in a chair in the middle of a dark room, when the door opens slowly and an ominous figure walks in the room.

All viewers can see in the promo is the person’s shadow, and it’s unclear whether it’s a man or a woman, but it’s made perfectly clear that Ben recognizes the person, as he says, “It’s you! Why did you blow up my wedding?” Ben then asks what his captor is planning to do with him.

Well, at this point, it’s really looking like the person who’s captured Ben is Eve Donovan (Kassie DePaiva). Eve has plenty of motivation for ruining Ben’s wedding and his life, since Ben killed her daughter Paige Larson (True O’Brien) back when he was the necktie killer.

Eve has physically attacked Ben in the past, and she’s never given any sort of indication that she’s willing to forgive Ben or put the past behind her.

According to DOOL spoilers for the week of July 27th, Ben’s captor will be revealed, and he’ll learn exactly what that person has in store for him.

Assuming it’s Eve, she probably wants Ben dead in the end, but she might have plans to punish him by ruining Ciara’s life and even unjustly framing someone else, like Claire Brady (Olivia Rose Keegan) or even Ben himself for the blast.

Eve may even drug Ben, or at least withhold his meds from him, to drive him crazy again.

The new DOOL promo also addresses another critical storyline – that of Allie Horton (Lindsay Arnold) and her pregnancy. As DOOL viewers know, Allie never wanted her mom Sami Brady (Alison Sweeney) to know about her pregnancy, because she feared that Sami would do something to make the whole situation unbearable for everyone involved.

And it appears that Sami will end up completely confirming all of Allie’s worst nightmares.

After Rafe Hernandez (Galen Gering) turns Allie’s adoption offer down, Will Horton (Chandler Massey) and Sonny Kiriakis (Freddie Smith) will get what they’ve been hoping for – the opportunity to adopt Allie’s baby.

The promo shows Will and Sonny toasting happily as they celebrate their chance to expand their family. But the promo teases that viewers may not realize what’s coming, so something unexpected is going to happen here.

And chances are, it will have everything to do with Sami. Lucas Horton (Bryan Dattilo) is heard in the promo saying, “If she finds out what you did…” with the “she” being Allie, and this is probably referring to Sami’s interference with Rafe.

As DOOL viewers know, Sami tried to strong-arm Rafe into not adopting Allie’s baby, and ultimately Rafe did turn Allie down, but it seems that Rafe did so based on his own feelings rather than Sami’s demands.

Still, DOOL spoilers say that Allie isn’t going to see it that way. Instead, Allie is going to be really irked at her mother after Nicole Brady (Arianne Zucker) tells Allie about what Sami tried to do.

The preview shows Sami coming to see Allie at Nicole and Eric Brady’s (Greg Vaughan) apartment, with Allie looking pretty upset. From here, Sami and Allie will have it out, leading Allie to get very upset and go straight into labor!

A bit later in the promo, Sami is shown at the police station talking with someone and lamenting about possibly ruining everything. We know from DOOL spoilers that Sami will be shut out of the delivery room when Allie gives birth, with Nicole helping Allie deliver her baby, so Sami could be talking about that.

Or Sami could be worried that her actions will mess up the adoption for Will and Sonny.

At any rate, the preview makes it clear that Sami is going to make problems by just being Sami, so that’s par for the course! It looks like it will be a big week on the show, so you won’t want to miss it.

We’ll be sure to keep you updated with all the latest Days of Our Lives news, daily recaps, and spoilers, so keep CDL as your go-to source for DOOL!