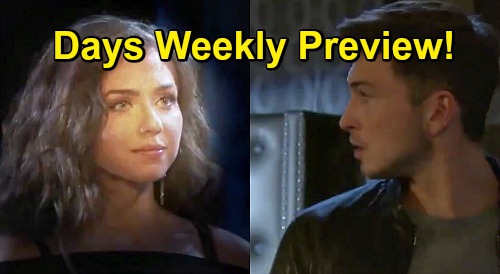 Days of Our Lives (DOOL) spoilers preview promo teases that the action is going to get spooky during the week of October 19 to October 23. The new Days of Our Lives promo is out, and there’s plenty of clues about what’s going to happen when the lights go out in Salem.

As you may have heard, the week of October 19 will bring a major power outage across the town, and for several episodes, the action will center on what happens during the night of the outage.

Well, the power is set to go out on Tuesday, October 20, and according to the promo, it seems that Clyde Weston (James Read) and Orpheus (George DelHoyo) will be at Statesville visiting with each other, perhaps in the rec room, when the prison goes dark.

The promo shows this scene, along with a scene of Eli Grant (Lamon Archey) telling Ben Weston (Robert Scott Wilson) that three prisoners escaped from the prison.

It seems that Clyde, Orpheus, and Wilhelm Rolf (William Utay) will be the three prisoners who escape, and it’s going to make for a major police scramble to reign them back in.

Orpheus will apparently make a beeline for Marlena Evans’ (Deidre Hall) penthouse, as he’s shown in the promo startling Marlena in the dark room. “You never know what dangers lurk in the dark,” Orpheus coldly tells Marlena.

It looks like Marlena and John Black (Drake Hogestyn) will be separated during the power outage, and Marlena might have to face the entire evening listening to Orpheus go on about how he’s been wronged and what he’s going to do about it.

Knowing Orpheus, he’ll probably relish the time with Marlena, while Marlena tries to figure a way out of her predicament.

Well, while Orpheus is off with Marlena, it seems that Rolf will be on a mission of his own, and it will involve Chad DiMera (Billy Flynn). Rolf is shown telling someone “Boo!” in the promo, and chances are, it’s Chad, since Days of Our Lives spoilers indicate that Rolf will have some sort of grudge toward Chad.

In fact, Rolf will even end up holding Chad at gunpoint, so he’s going to mean business.

Now, where Clyde will end up remains to be seen, but there’s a good chance that he’ll go to see his son Ben, who’s grieving over Ciara Weston’s (Victoria Konefal) presumed death.

But the preview shows a very much alive looking Ciara standing before Ben in the Salem Inn. Days of Our Lives spoilers indicate that this will be a vision on Ben’s part, but nevertheless, it will be good to see Ciara again!

It also appears that Belle Black (Martha Madison) will be stuck at Hope Brady’s (Kristian Alfonso) house with someone dangerous during the blackout…Jan Spears (Heather Lindell).

Belle is shown looking startled in the dark house, when Jan appears with a flashlight. We’ll see how this interaction between Jan and Belle goes – given that they’ll be essentially trapped together, they’ll have nothing to do but talk, so it could get pretty intense.

Of course, Andre is supposedly dead, so if he returned, it would be a major revelation for Abigail DiMera (Marci Miller), who killed him in self-defense several years ago. But then again, this could always be Tony, back in town to check on family or the family business.

Either way, it looks like we’re in for an exciting week, so stay tuned! We’ll give you updates as DOOL news comes in. Stick with the NBC soap and don’t forget to check CDL often for the latest Days of Our Lives spoilers, daily episode recaps, and news.