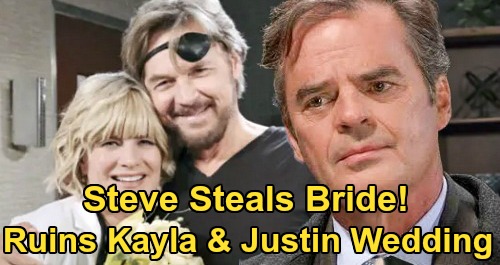 Days of Our Lives (DOOL) spoilers tease that Steve Johnson (Stephen Nichols) will struggle to fight his growing feelings for Kayla Brady (Mary Beth Evans). Of course, Steve’s feelings for Kayla have never truly gone away – at least not while Steve’s been in control of his mind and body.

It’s the time Steve wasn’t in control that presented a problem. Steve pushed Kayla away due to his “Stefano DiMera” transformation and all the damage it brought. The good news is Steve has worked through most of his issues.

The bad news is Kayla’s moving full-speed ahead in her romance with Justin Kiriakis (Wally Kurth). Steve will soon fear it’s too late to win Kayla back.

After Steve decides to push for another chance with Kayla, he’ll witness Justin popping the question. That’ll leave Steve uncertain of whether he should say anything.

Deep down, Steve will know that they’re meant to be. It’s just a matter of whether Steve can be brave enough tell Kayla how he’s feeling. Steve’s downright fearless when he’s taking down baddies, but the fear of rejection is a different story. It may be tough for Steve to think about Kayla turning him down if he makes an emotional plea.

During the week of June 1-5, Days of Our Lives spoilers say a drunken Steve will consider opening up to Kayla. A little liquid courage will help him out! Naturally, Steve’s plan might be thwarted by someone like John Black (Drake Hogestyn). If Steve’s going to share a moment like this with Kayla, he needs to be sober for it.

However, a sober Steve may also realize it was the wrong call. Steve might keep putting this conversation off – just trying to convince himself that he can live with Kayla and Justin’s marriage. Once Justin and Kayla’s wedding day arrives, will Steve wake up and realize he just can’t let Kayla do this?

DOOL weddings often face an interruption, so Steve might be the culprit at this one. Perhaps Steve will even show up and beg Kayla to marry him instead. After all, Steve suggested Kayla should just rip the divorce papers up when he first returned.

That was before Steve knew the whole Stefano story, but he’s coped with that story since then. Steve will likely want to pick up where they left off – which is as husband and wife. Could Justin and Kayla’s wedding turn into Steve and Kayla’s wedding instead?

Although it might be a bit tacky, Days could work around that if Justin willingly steps aside for this groom swap. Justin could take the pressure off Kayla and insist that Steve’s right. “Stayla” is meant to have a lasting love story. With Justin’s blessing, Kayla might be willing to surrender to her true feelings and marry Steve on the spot!

Do you think Steve will crash this wedding and offer himself as an alternate groom? Could Kayla end up marrying Steve at her nuptials instead of Justin? We’ll deliver updates as other Days details emerge.