Days of Our Lives Spoilers: Jake Is Stefan, Past Before Gabi Revealed – Early Life as Sam Maitlin Ties to British Gwen 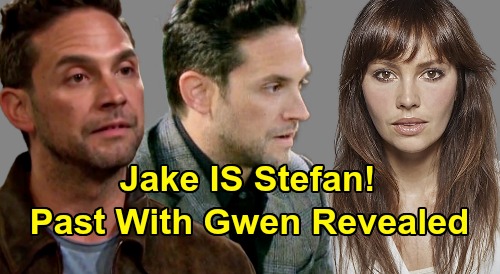 Days of Our Lives (DOOL) spoilers reveal that fans are still curious about the mystery behind Jake Lambert (Brandon Barash). DOOL hasn’t confirmed whether Jake is Stefan DiMera (Brandon Barash) or not, but it there are some good reasons to think so. Let’s look at what we know so far.

For starters, Jake has struggled to get Gabi DiMera (Camila Banus) off his mind. He keeps flashing to recent moments and often looks concerned about the toll all this is taking on Gabi. From almost the get-go, it seemed like Jake was lying about this new persona.

We also know Gabi started sensing Stefan’s presence just before Jake appeared in town. That can’t be a coincidence! Gabi knows her husband better than anyone, so she kissed Jake to confirm he was Stefan. That sealed the deal in Gabi’s mind, especially since Jake kissed back.

We’ve also seen Jake looking up info about Gabi and Stefan online. Jake even touched Gabi’s picture tenderly on his tablet. It seems like Jake may know exactly who Gabi is and remember his love for her. Even if Jake doesn’t, that love may be buried underneath the surface. Jake may be drawn to Gabi, even if he doesn’t realize exactly why.

There’s also the matter of Jake’s ex-girlfriend, Gwen (Emily O’Brien). Days of Our Lives spoilers say Gwen will pop up as a patient at Bayview with Claire Brady (Olivia Rose Keegan), but she’s got a twisted history with Jake – or perhaps Stefan before he was Stefan! We can’t forget that Stefan wasn’t always the great Stefan O. DiMera.

Since it looks like British actress Emily O’Brien is set to play this ex-girlfriend, Gwen may be Stefan’s former flame from the United Kingdom. After Stefan was dumped out in front of an orphanage, he was eventually adopted and given the name Sam Maitlin.

Sam went to boarding school in the UK before becoming a corporate raider. He lived all over the world, including stints in London, Paris, Berlin, Rome, the Azores and the Canary Islands. Sam had a very full life before he came to Salem and met Gabi, so he must’ve had plenty of exes and made loads of memories.

When Jake told Ben Weston (Robert Scott Wilson) he had a lifetime of memories, he may have been referring to Sam’s! It makes sense for Days to tie Sam and British Gwen together.

When Stefan first told Abigail DiMera (now played by Kate Mansi) that he grew up in the UK, Abby noted that he didn’t have a British accent. That led to Stefan seemingly revealing his true one and describing a British pudding.

The connection’s right there for the taking. Why else would they make Gwen British? It would be weird for a guy like Jake to be dating some prim and proper Brit. Of course, there’s a chance O’Brien won’t use her British accent in the role, but “Gwen” certainly sounds like it could be a British woman.

Bottom line, we can’t take Jake’s word for it when he says he’s not Stefan. Jake may have an ex who isn’t Gabi, but that’s perfectly reasonable considering he lived his entire life as Sam before he ever met her.

Stefan wasn’t even Stefan for very long, so there’s a lot of Sam’s past that hasn’t been explored. Maybe after Gwen’s debut, DOOL can finally reveal the whole story.