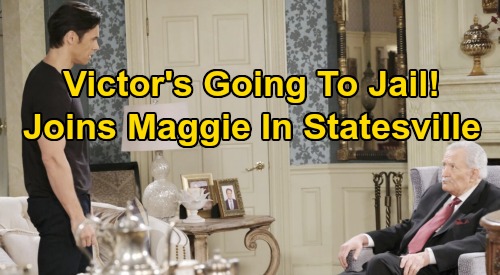 Then, Victor and Xander conspired to keep the baby swap a secret as they threatened Dr. Amanda Raynor (Victoria Platt) into keeping quiet about it as well. Those are some pretty big crimes, and both Victor and Xander are going to have some major explaining to do.

Sarah Horton (Linsey Godfrey) and Eric Brady (Greg Vaughan) are going to be out for blood as they try to cope with the fact that their daughter died and that the little girl they’ve been raising belongs to someone else. Victor and Xander will have to deal with an angry quad of parents, and that doesn’t even consider their future legal woes.

Well, for Victor, the prospect of jail time should be pretty scary. Victor is aging, and his health isn’t the best at this point. And while Victor can afford the best legal representation that money can buy, it might not help him much considering that Dr. Raynor will probably testify about how Victor threatened her through Xander.

As DOOL viewers will remember, Dr. Raynor was pretty scared about the prospect of Victor coming after her if she spilled the secret. And if the new Salem DA is smart and really wanted to go after Victor, then he or she could get Xander to turn on Victor and turn state’s evidence against him in exchange for immunity. Whether that happens or not remains to be seen, but it would be one way for law enforcement to finally get Victor.

Of course, Victor has gotten away with a lot of crimes over the years, but could this be the one that actually sends him to prison for the rest of his life? One could argue that Victor has it coming, after everything he’s pulled off in his lifetime of crime.

And it would certainly be an unusual time for Victor to wind up behind bars, as he could be hauled off to Statesville at the same time his wife, Maggie Kiriakis (Suzanne Rogers) is doing time there.

And actually, Maggie could end up doing even more time at Statesville once the baby swap details become knows. Maggie’s drunk driving led directly to the death of Sarah and Eric’s baby, and that could tack on additional time to Maggie’s sentence. Could Maggie and Victor end up spending their final days behind bars together?

We’ll see what happens, but it’s pretty hard to imagine Victor skating on the charges that will surely be leveled against him for the various crimes he committed related to this baby swap.

Do you expect to see Victor end up at Statesville with Maggie? Keep watching the NBC soap and remember that CDL is your place for all the hot Days of Our Lives spoilers and updates. We’ll be sure to let you know as we learn about more DOOL news!