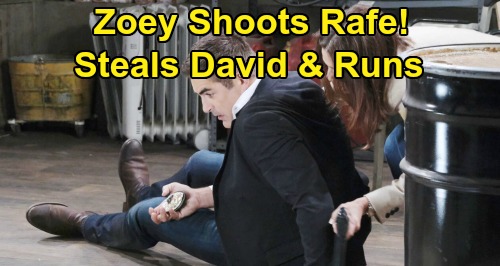 Days of Our Lives (DOOL) spoilers tease that Rafe Hernandez (Galen Gering) will be in a desperate fight to get his son back. Rafe hasn’t been able to legally adopt David Ridgeway (Kyler Ends), but he’s raised this sweet boy since he was just a baby. Although Rafe may not be David’s biological father, he loves him just like he would his own flesh and blood.

This isn’t the first time David’s been kidnapped, so this has been a repeat nightmare for Rafe. The good news is Rafe will ultimately be reunited with David. The bad news is there’ll be some scary moments before David is found.

Since Zoey’s terrified of losing contact with her nephew, she’s willing to go along with Orpheus’ plans. In fact, it looks like Zoey may take things a step further with some plans of her own!

During the week of May 25-29, Days of Our Lives spoilers say Orpheus will be busy meeting with Marlena Evans (Deidre Hall) and Steve Johnson (Stephen Nichols) across town.

Orpheus will trade John Black (Drake Hogestyn) for the money he demanded, but Steve will whack this villain in the head soon after. That’ll prevent Orpheus from returning to his hideout to collect David and escape.

Zoey, on the other hand, may decide she should be the one to make a break for it with David. She’s been upset enough to come unhinged – and it sounds like that’s what’s going to happen.

Days of Our Lives spoilers say someone will fire a shot at Rafe. That someone seemingly has to be Zoey since Orpheus elsewhere when all this is going down.

It looks like Rafe’s police shield will take the bullet for him, so that’s a relief. However, panic will set in when Rafe realizes David is gone! David will be missing briefly, so Zoey will likely snatch the kid and try to run.

Fortunately, Hope Brady (Kristian Alfonso) will be there as backup for Rafe. She may be instrumental in catching up with Zoey before it’s too late.

Then again, Zoey might wind up having a crisis of conscience and ultimately bolting on her own. Zoey has a bit more of a moral code than her father and brother, so she might determine that she can’t rob Rafe of raising David after all.