BY hellodrdavis on May 22, 2020 | Comments: Leave Comments
Related : Days of Our Lives, Soap Opera, Spoiler, Television 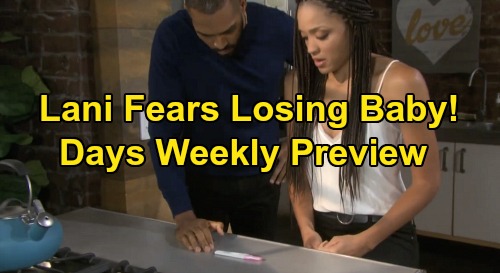 Days of Our Lives (DOOL) spoilers preview teases that viewers are in for a big week, May 25 to May 29, that’s all about some big life changes for some DOOL couples. The promo teases that life can change any second, and that will certainly be the case on the show this week. First off, the preview promo shows Eric Brady (Greg Vaughan) down on one knee and proposing to Nicole Walker (Arianne Zucker) amidst a romantic setup.

Nicole is heard saying, “I’ve been waiting half my life to marry this man,” as she’s shown smiling happily to Eric’s gesture. This is definitely a proposal that’s been a long time coming. Nicole and Eric have gone through a lot to be together, and now will be their time to revel in their happiness and enjoy their engagement.

Of course, the engagement gives Eric something good to focus on, now that he’s found out that his daughter actually died last Mother’s Day. But thanks to Eric’s solid situation with Nicole and Holly Jonas (Elin Alexander), and now his pending marriage to Nicole, it looks like he’s going to manage through his heartache just fine. Look for some truly great “Ericole” moments this week on DOOL.

Next, the promo addresses a love triangle that’s in motion between Steve Johnson (Stephen Nichols), Kayla Brady (Mary Beth Evans), and Justin Kiriakis (Wally Kurth). Steve has stepped back, having told Kayla that he would let her go. Of course, that didn’t sit well with Kayla, who fired back that she was not Steve’s to “let go” and that she was sticking with Justin.

Well, now that a little time has gone by, it appears that Steve is going to realize that he really does want his “Sweetness” back. It has really rattled Steve to see Justin cozying up to Kayla, and the new DOOL preview shows John Black (Drake Hogestyn) asking Steve if he wants Kayla back. “I’m going to go get her,” Steve replies.

OF course, that all sounds well and good, and while Steve will determine that he wants Kayla during the week of May 25th, ongoing DOOL spoilers indicate that he’ll have reached this determination a bit too late.

DOOL spoilers say that Steve will go to approach Kayla to tell her that he wants her back right as Justin is proposing. We’ll have to see what Steve ends up doing as he comes upon that big scene.

Finally, the new Days preview addresses a tense situation between Lani Price (Sal Stowers) and Eli Grant (Lamon Archey). As DOOL viewers know, Lani and Eli are happy and in love, and this week Eli will even propose to Lani.

Lani will happily accept, but as the couple is talking about wedding dates, Lani will check her calendar and do some quick calculations, then realize that she could be pregnant.

That’s where the promo picks up, and Eli and Lani are shown hovering anxiously over a pregnancy test and counting down the seconds until they can check the results.

Day of Our Lives spoilers say that Lani will indeed be pregnant, which will be some shocking news for both her and Eli. But while Eli will be immediately happy about the news, Lani won’t be so sure whether another pregnancy is something that she wants.

DOOL viewers will remember that it tore Lani and Eli apart when they lost little David Abraham Grant, and Lani will be worried about the possibility of a similar loss occurring again.

It looks like some serious discussions are in Eli and Lani’s future about this pregnancy and whether they should continue with it. We’ll see what Eli and Lani decide, but something tells us that Lani will just need some time to work through her fears about what happened with David.

It looks like we’re in for an exciting week, so stay tuned! Keep watching the NBC soap and stick with CDL for all your hot new DOOL spoilers. We’ve got your latest Days of Our Lives  news, daily recaps, and ongoing updates as well.