Doubling Down With the Derricos Recap 08/18/20: Season 1 Episode 2 “Multiple Aftershocks” 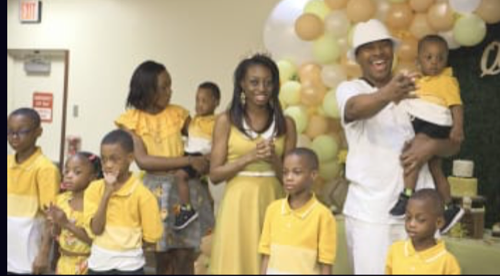 Deon and Karen are in the van, he is driving her to the hospital for bed rest, they don’t want the same thing to happen like last time when they lost Carter. Deon thinks it is going to be a challenge in the household without Karen there. Deon’s mindset is bouncing, taking care of the children is a juggling act.

Darian is helping as much as she can, she wants to show a good example for the other children.

Day 5 of bed rest, Deon surprises Karen with all eleven children for a visit, she is so excited to see them. Karen goes over the homework with the kids to help out a bit.

Deon is still trying to balance between work and home, it is day six and he still hasn’t come up with a plan. The kids are all playing around, it is too much for Deon, so he calls his mom. The children are going to be thrilled.

Karen calls, Deon tells her that he has this. She reminds him of the children’s extracurricular activities. Deon takes the boys and brings Derrick to his basketball class.

Day 13 of bed rest. Deon and the children call grandmother GG to wish her a happy birthday. All of a sudden, there is a ring at the door, GG is there. The kids are over the moon and all over her. Darian is so happy, she is crying. When GG visits she is showered with an abundance of love and she is so happy to be there with them. Back at the hospital, Karen lost twelve pounds, she has no appetite to eat and no energy. Being on bed rest is so hard.

GG is really impressed with Deon and Karen’s parenting skills, she says the children are so good. GG is so happy to be there for her grandchildren, God gave them to her and she loves him for it. Deon is really worried that Karen is losing a lot of weight, it is weighing heavily on him and he wishes he could relieve her of her worry. Deon tells GG that Karen lost the weight.

She is on IV and they can’t force her to eat. GG tells Deon that he needs to let Karen know that she has to take care of herself so they can take the new babies home. He needs to offer Karen some strength.

Karen is 28 weeks and five days, and she has started having contractions back to back, although she has. The medical staff is able to stop Karen’s contractions. Six hours later there is an earthquake. Shortly after the earthquake, Karen went into premature labour. The doctors were able to stop her contractions. Twelve hours later, a 7.1 magnitude aftershock occurred.

Day 35 of bed rest, Karen is having contractions again, two minutes apart. Deon gets a call from the doctor, he tells him that Karen is in labour. Deon is terrified, the babies have not had enough time in the womb. GG is concerned if everything will be ok, because when Karen had the last three, Carter didn’t make it.

At the house, GG makes all the kids hold hands and they say a prayer for Karen. In the hospital, Karen is shaking really bad, Deon is scared. The cesarean lasted two hours. Karen has two girls and one boy. Karen is still shaking from the meds that she was on. While Karen is recovering after a difficult surgery, the doctor updates Deon on the status of their firstborn daughter, Dawsyn, she has a hole in her heart.

She needs two surgeries but needs to gain weight and get stronger for the surgeries. While Karen is in the hospital, GG is keeping a brave face for the children. It’s a difficult time, and GG just keeps praying that all three babies will come home. Deon calls and tells the children that Karen had two girls and one boy.