Doubling Down With the Derricos Recap 09/08/20: Season 1 Episode 5 “Divide and Conquer” 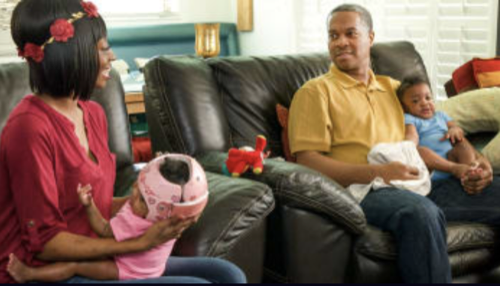 Deon’s friend, Eric, is showing Derrick how to shadow a ball. Awesome Dawsyn is home and doing great. Thankfully they have a hand on her feeding now. They feel blessed to have their lives back together before Dawsyn’s next heart surgery. All the children are elated that their baby sister is home. It’s a lot of work, but Karen is grateful at how well she is doing. It’s bothering Karen that she can’t make Derrick’s first basketball game, but she is not leaving Dawsyn. Karen and Deon split the workload, he takes eleven with him and tells them to cheer loud for Derrick.

GG is still visiting and helping out as much as she can. Karen is not sleeping, the house is chaos, but she loves talking to GG, another adult aside from Deon. The fact that she cannot feed Dawsyn is messing with Karen’s mind because that is the way she bonds with the babies. GG asks Karen about her relationship with Deon, she says she doesn’t see him that much. GG expresses that it is important to talk to Deon, keep the lines of communication open. GG thought it was rough with two children, she can’t imagine fourteen, she is worried about Karen and Deon. GG tells her that when they communicate together they stay as one unit, they don’t want to become two units.

Deon is trying to keep the older children quiet and promises to take them to LOL Playhouse if they stay quiet while the little ones are sleeping. Deon tries to get Darian to join in but she doesn’t want to, she wishes she could spend time with her friends her age. Sometimes she wishes she was the only child again.

It’s dinner time, Karen tells the children that her friend Becky (they were flight attendants together) is coming over with her husband, Jeffrey. They are in town for a convention, so they are stopping by. Jeffrey was so impressed with how calm the children were and independent. Becky knew Karen before the fourteen and loves to have fresh ears to talk to. Becky asks Karen if Deon is going with her during the surgery, Karen says no because he has a problem seeing Dawsyn with tubes in her because they lost Carter.

Deon takes ten of the children to LOL, Karen stays home with the babies and Darian spends the day with GG, they go get pedicures. GG tells Darian she can call her anytime for anything. Darian is excited to be around her, she knows she can talk to her. Darian tells her that she has a crush on a boy, but doesn’t talk to him because she is shy. Karen and Deon told her that she can’t date, she can only be friends. Darian asks GG to speak to her parents about getting time to spend with children her age. Darian tells GG she needs her, to help her with things like this. GG tells her to call her any day, any time.

Karen is worried that Deon is not bonding with Dawsyn, it’s like she is alone. Deon gets upset, he says he is there with his children and taking care of them. She says he is hesitant, he says maybe so, but she needs to let him come around when he does. He tells her that she has no idea what goes on in his head as a father. Karen says he is a phenomenal father, she just wants him to bond with Dawsyn. GG walks in and asks what is wrong, they won’t say. GG brings up Darian, she tells them that she needs to start doing things with her peers. Deon knows his mother is trying to help, but the timing couldn’t be any worse. Karen doesn’t want Darian to be overlooked because they have three new babies. Karen says they all need to take a breather.

The family goes to church every Sunday and today the church is doing a special prayer service for Dawsyn. Pastor Fowler calls up the family on stage. Deon brakes down when the pastor mentions Dawsyn’s surgery.