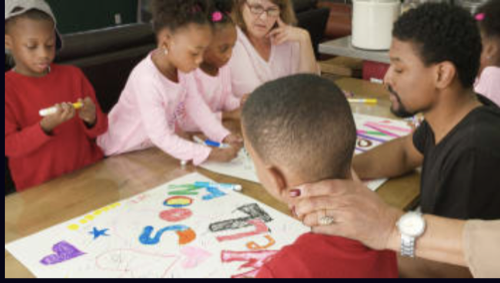 Deon is cutting GG’s hair, she asks if he is going to the hospital for the surgery, he says he doesn’t want to. She tells him that it is very important that he supports Karen. She reminds him that went he had surgery she was alone and it was tough. She says she will stay with the babies, he has got to do it, that is it. Deon gets emotional, GG tells him he will be fine and hugs him.

Deon tells Karen he wants to talk to her about the surgery, he has decided it is best if he goes. Karen is delighted, she hugs him. He tells her that the conversation with GG brought it home for him. Deon says they are unit and she needs to know that he is there for him.

The family is at the park, Karen and Deon talk to Darian. She admits that she has too much responsibility. There are days that she wants to be in the house, but there are days she feels mentally insane. She has nobody that can relate to her because nobody is her age. She says she loves being a big sister, it is fun, but she wants to be with kids her own age.

She tells them that there is this camp she wants to go to, it’s in Michigan. It’s an arts camp, they have video editing and that is what she wants to do, it’s for a week. Deon tells her that they will be a nervous wreck if she goes because it is far away. They want her to have that experience, but something closer to home. They tell her its not a no, they just have to look into it more.

All the family is at Gritz café for dinner. It’s always a challenge ordering out, the children have different tastes. The family joins with the owner of the café and the staff and say a prayer for Dawsyn. GG is there, Eric too, and Karen’s friend.

It is the morning of the surgery, Deon and Karen are on their way to the hospital. Deon is grateful, but he is scared and emotional. Karen tries not to talk about it because there is a 1% chance there can be problems, and she doesn’t want to think about it. They arrive at the hospital, Dawsyn wakes up. They go in the waiting room and wait with Dawsyn to be called to go in.

Back at home, the children are doing welcome back posters for Dawsyn. Eric is there, they keep it real positive for the kids.

They start to get Dawsyn prepped for surgery and Karen is already a mess. She thought she had this, but seeing Dawsyn getting her IV was tough. She is so grateful that Deon is stepping up. When Dawsyn came home she didn’t want to be touched, and now they are putting her in the same environment, Karen says it is a lot to deal with. It is time to say goodbye to Dawsyn. Karen says their angel, Carter, is by their side. The surgery is five to six hours, Karen and Deon sit in the waiting room.

Karen and Deon go home, they tell the family that Dawsyn’s surgery went smooth, she will be in the hospital for two weeks. Karen says that Dawsyn will now have two dates to celebrate, her birthday and her heart day.

Deon and Karen talk about Darian going to camp. Karen says it is a big decision to make for all of them.

It is time for Dawsyn to come home and GG is so proud of Karen and Deon. They come into the house and see the sign that that Dawsyn’s siblings made for her to welcome her home. Karen believes that all the love they have for Dawsyn will help her get better. Karen goes over the rules on how they have to pick up Dawsyn, and they have to be very gentle with her. Deon tells Darian that he and Karen have decided to let her go to Detroit for summer camp. Darian is excited, GG hugs her.