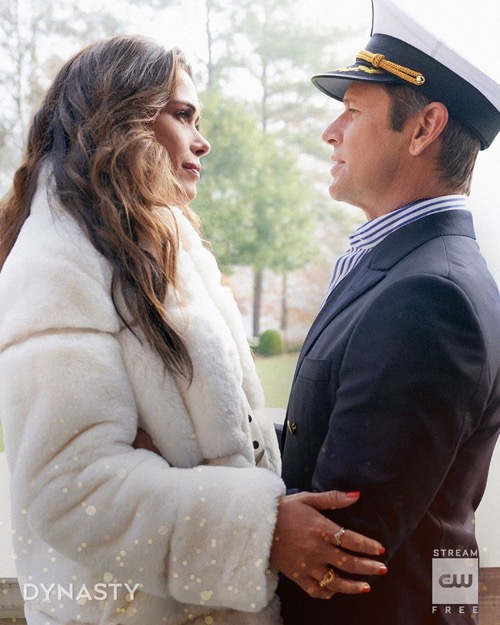 Tonight on the CW Dynasty the reboot of the 1980 series that followed the Carrington family airs with an all-new Friday, January 24, 2020, episode and we have your Dynasty recap below.  In tonight’s Dynasty season 3 episode 10 “What Sorrows Are You Drowning?,” as per the CW synopsis, “Anders seeks help finding Kirby, so Fallon assembles Sam, Colby, Culhane, and, reluctantly, Adam, for the mission. Cristal and Alexis have a historically epic encounter.”

Fallon is throwing crystal glasses at Blake, calling him a liar and a murderer. Blake says she doesn’t know the whole story. Anders interrupts and asks to speak to Fallon, it is important. He plays a recording for her, it is Kirby, she says she is committed to Joel and he shouldn’t’ contact her. Anders asks if she heard from Kirby, she says no, she has been too busy getting a murderer off. Then she says, let’s go see Kirby.

Blake and Krystle are having dinner, he says he throwing himself a yacht themed fiesta; he wants his membership reinstated.

Jeff tells Michael that he has confidence in him and he is going to give him his shares. Michael says he doesn’t need to do this, these shares plus Fallons would mean he is the majority owner. Jeff says he has to prioritize other things in his life right now and he knows that he got this.

Liam has confirmed that Kirby has sold the company. Fallon says the only guilty party is her snake of a father. They narrow down where Kirby is, she is in a compound. Kirby enlists Adam to pose as a doctor trying to get a job in the compound, so he can get in and save Kirby.

Blake meets up with Krystle after she went riding, she said she wanted to see if she could find closure about Mark’s death and when she was out there, she found a bullet casing. Blake says he shoots a lot at the range. Krystle says it wasn’t at the range, it was at the area where Mark was killed, Blake says it is simply a coincidence.

Michael tries to hire Fletcher as his full-time PR guy, Sam walks up and says not tomorrow night, cause they have a date – then he says ok, but he wants to be with Fletcher.

Krystle goes to see Tony and shows him the casing. Tony says it is a custom Carrington round, only the family has access to it. Tony says that Mack had access as well, he is the one that probably dropped it.

Anthony later meets up with Alexis who tells her that she better not have said her name to Krystle when she was talking to him about the casing. Anthony assures her that he didn’t, nor did he mention to anyone that she made him lie to the police.

Adam and Fallon are undercover as a doctor and a nurse. The two have to pretend to be married to get in. Once there, Fallon uses the restroom and Adam goes in for his meeting.

Krystle finds Alexis in the house, she tells her to get out, she wasn’t invited. Alexis tries to pretend that she is looking for her son, then she asks Krystle if it was difficult when she lost the baby.

Fallon meets up with Kirby in one of the compound buildings and tells her that her father is worried about her and concerned that Joel is using her. Kirby hears her concerns, but assures her that nobody is using her, she is there to cleanse herself from toxic relationships.

Fallon tells Anders that Kirby is fine. Anders says that the funds are being transferred to Kirby’s account tomorrow and Joel is on it. So, they are stealing Kirby’s money, not Kirby. Anders says he just wants Kirby back.

Michael, Fletcher, and Sam are on a private jet, the first round of Fletcher’s new PR job. One of Michael’s guests tells Sam that they are not there to make a deal, they are just there for the swag and the fun.

Blake tries to get his membership back and is told no, because of the murder trial. Blake uses good old fashion bribery to get back in the club.

Krystle is going through Blake’s files and Anders catches her. She asks if there is any news from Kirby, he says yes, Fallon just needs to prove to her that Joel is a Charleton. Anders asks her what she is really doing in the office. Krystle says looking for a file on Mack. Meanwhile, Fallon sees Joel with Kirby, in what looks like a wedding. Fallon interrupts and takes control, she takes the microphone, she starts singing a song with her “husband.” Kirby has had enough, she stops them. Fallon tells Kirby that she is being conned by this hippie hipster to steal her money to fund his retirement. Fallon takes off her wig and shows her real identity. Kirby says she is not being conned, she chose to give Joel he money. Then, Kirby calls Fallon the most toxic Carrington of them all.

Alexis appears at Blake’s party, she says that Krystle invited her.

Fallon gets herself thrown out of the compound, and wants to figure out how to get back in – Adam has an employee badge, they are back in.

Krystle tells Blake that the casing was the same caliber that killed Mark, she thinks Mack killed him. Blake says that Mack’s alibi was that Alexis saw him that day, so he couldn’t have killed Mark. Krystle doesn’t believe that Alexis told the truth, she says she is going to confront her. Blake tells her she is in the party, Krystle is surprised, Blake reveals that Alexis said she invited her.

Fallon sneaks back into Kirby’s room and apologizes, she says she just came there to help. Fallon says she is sorry and hugs her.

Back to the jet, Michael tries to talk business but nobody budges. Michael says they want an honest conversation. One guy says their stadium is in a crap neighborhood and nobody in their right name would spend money advertising there. Michael tells everyone to get off their plane.

Adam tells Fallon that Blake did what he did, only after he found out that Mack shot Mark, that gunshot caused Krystle’s horse to be spooked and that is how she miscarried. Just then, Fallon walked up, she says she called her dad and he will be there in a few minutes, do they want a ride home.

Krystle sees Alexis sneak out of the house, Krystle says she knows that Mack did not shoot the bullet that killed Mark and she sneaked into the manor yesterday, lied to get into today, but worse, she lied about seeing Mack when she was out of town. Krystle trips, a gun falls out of her purse and Krystle catches. Krystle tells Alexis that she was the one who fired the gun, Alexis admits it and says she was aiming at her, and she is sorry that she missed. Krystle goes after Alexis, and they both fall into the fountain. Blake is inside continuing his partnership and celebrating getting back into the club. They stop fighting and Krystle tells her that she is going to get what is coming to her.

Sam and Fletcher are sitting at a bar, Fletcher says they are a dream team, Sam says if he wants to be together, he is going to have to give him more of him and walks away. Fletcher tells Sam his middle name and says sorry for holding back.

Fallon tells Adam that a promise is a promise, she will speak to Blake. He says don’t bother, he did it to get to know her better.

Fallon goes inside, Kirby thanks her for going after her. Fallon says she is just happy that she decided to come back on her own. Fallon writes a note to Blake and says sorry, but says he could have told her the truth and still doesn’t forgive him for his actions. She is done enabling him for his self-serving behavior and is moving out of the manner for good. Blake catches her going out the door, he tells her she will be back soon enough. Fallon leaves. Blake goes to see Blake, tells him that Alexis shot Mark and caused them to lose their baby.