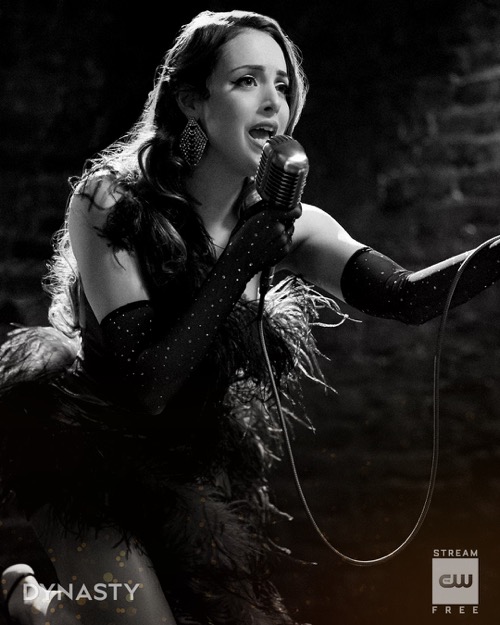 Tonight on the CW Dynasty the reboot of the 1980 series that followed the Carrington family airs with an all-new Friday, February 21, 2020, episode and we have your Dynasty recap below.  In tonight’s Dynasty season 3 episode 13 “You See Most Things In Terms Of Black & White,” as per the CW synopsis, “Blake and Cristal contend with their new houseguest, while Adam seeks help from Alexis and Colby.

Fallon plans a special gesture for Liam who gets a significant career opportunity. Sam tries a different kind of relationship, while Kirby pines for her crush.”

Dominique arrives in the Carrington mansion and completely changes the breakfast fare to the distaste of Blake and Krystle, it is all greens and fruits. Blake reminds Dominique that she is supposed to stay in the west wing and has no communication with the kitchen staff. Krystle says three seconds in and she wants to kill Dominique. Krystle gets a call and leaves the table, Blake spits out the juice and yells for some bacon.

Fallon does a pretend proposal to Liam, to Sam who approves of it. Fallon says she is doing later that evening. Liam comes around the corner, the two-act weird and he notices.

Alexis is giving a massage to Jeff when Adam comes in and says he needs money, Jeff will have nothing to do with it and reminds him that he tried to poison him.

Dominique wants to do a reality show starring her, but the network won’t do it unless she gets Blake and Krystle involved.

Kirby is with Fallon, he says he is going to throw a drink in Fletcher’s face for not telling him that he was married. Fletcher walks up, he tells Sam that he has an open marriage and just didn’t know how to tell him. Fletcher asks Sam if he still wants to see each other, Sam says it is a good idea. Kirby tells him it’s a bad idea, Sam says, oh the girl who slept with Adam Carrington.

Liam arrives to have dinner with Fallon, he tells her that he needs to go to London on business, borrow the jet and put the dinner plans on hold. Fallon’s proposing to him is spoiled, but she smiles and tells him that she will see him when he gets back.

Sam is picking out clothes to wear for his date with Fletcher, Fallon is there, Sam tells her to go to London and propose there.

Dominque goes to see Anders and asks him to tell her a little about Krystle, she wants to get to know her sister-in-law. Anders doesn’t trust her, but in the end, he tells her that if she were to have a dinner party, Krystle has an affinity for roasted pork.

Sam and Fletcher are on their date, and Sam cannot stop thinking about his husband. Fletcher hands Sam a gift, he bought him an expensive watch.

Dominque prepares a feast of pork, Krystle comes in and she says she prepared it for her, and afterward, they can have manicures and pedicures together. Krystle tells her that she needs to get out of there, she is allergic to pork.

In the jet, Fallon makes a toast to Liam, he tells her to save the toast, he has a better idea, he can practice his pitch to her.

When Liam is done, he asks Fallon how it was and she says meh. Liam then continues, then when he is done, Fallon gives him some constructive criticism. In his story, everyone he knows, including Fallon, plays the characters. Fallon gets confused in the story, she tells him to just tell her who stole the peach diamond so she can go on with her story. Fallon tries to change Liam’s mood by kissing him, but he goes back to the story, she tells him to keep it sexy, short and get to the end. Liam gets to the end of the story, the lounge singer had the peach diamond. Fallon tells Liam it was good, it took the whole flight. She tells him that it didn’t make sense in a lot of places, she would wait before he pitches it. Liam tells her it is a complex story, maybe that it is why she can’t understand. Fallon gets upset, she takes that comment like he is calling her stupid and walks out, tells Liam to go pitch his stupid story.

Sam is with Kirby, he shows his watch off to her and tells her that he is sure that Fletcher’s marriage won’t last long because he is falling in love with him and he wouldn’t be surprised if Fletcher feels the same.

Dominque goes to see Anders, she has two glasses of champagne and is going up to see Krystle, but she is heading out.

Alexis is with Adam, she tells him that she did everything she could to get Jeff to give him the money, she is sorry it didn’t work. Adam says it is ok, he is going to sell the vineyard that he bought for Blake, it is in his name.

Krystle heads to a hotel, Dominique follows her and takes a video of her going into a room.

Kirby catches Adam inside the Carrington mansion. They start making out and Adam pulls her inside Blake’s office. They make out on the desk, and he tells her that this has to be the last time, it is too complicated. Kirby says she is not going anywhere until she finds out why he is there, he reaches over and grabs the deed to the vineyard. Kirby tells him that he could have just asked her.

Fallon is going to her hotel room and Liam is there. He says he didn’t go do the pitch, he wanted to tell her the true story, the PI had the peach diamond the whole time. She tells him that she is more confused, she goes into her hotel room and it is filled with roses, Liam gets down on one knee, Fallon turns around and she is happy, he asks her to marry him. he says there was no pitch, he saw the ring, and he wanted to be the one to propose. He puts the ring on her finger and tells her to run away with him, she says till the end of time.

Kirby is sitting across from Fletcher, she tells him that she is worried about her friend Sam, she thinks he is falling in love with him. She says she is there to tell him to be honest with Sam, no matter how hard it is.

Krystle is in the hotel room, she is with a man, tells him that she paid him half when they were in Mexico and here is the other half. She then gives him a photo of Alexis. She goes on to say that this woman killed her ex-lover and her unborn baby, and tried to put her husband in jail, there needs to be a price for her actions. He says he is pretty sure this is the ultimate price.

Kirby meets up with Sam in a bar, he tells her that Fletcher dumped him because his husband can’t handle it and is jealous. Kirby says she is sorry and tells him that he deserves too much more than that.

Krystle gets home, Blake tells her that he is proud of her for not murdering Dominique yet.

Sam is celebrating with Liam and Fallon, he knew about Liam’s plan the whole time. Sam and Fallon walk away to talk business, Liam enjoys his champagne, turns around and sees a woman he recognizes. He walks over to her, it is Heidi, she says it has been a long time, since Switzerland. She thinks the last time they spoke was when she was putting the baby up for adoption. Liam asks her if there is something she wants, she looks over at a boy sitting on a couch, she tells him that it is their son Connor, and it is time he meets his father.