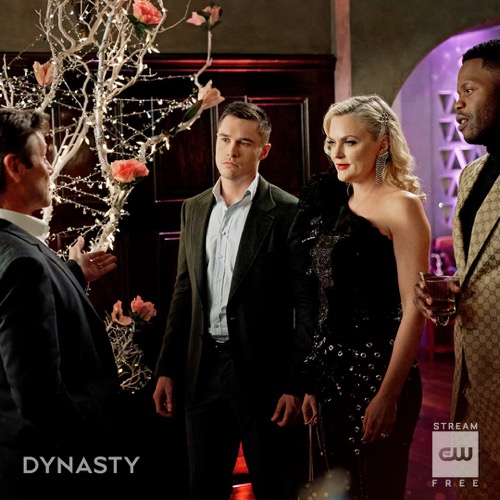 Tonight on the CW Dynasty the reboot of the 1980 series that followed the Carrington family airs with an all-new Friday, February 28, 2020, episode and we have your Dynasty recap below.  In tonight’s Dynasty season 3 episode 14 “That Wicked Stepmother,” as per the CW synopsis, “As Blake and Alexis continue to vie for the loyalty of Fallon and Adam, Cristal finds herself resorting to drastic measures to carry out her plans.

Liam contends with someone from his past while Dominique calls in a consequential favor from Culhane.”

Liam and Fallon are planning her engagement party, Alexis intrudes, Liam doesn’t show up, he is busy with work.

Dominique finds Krystle in the hallway and shows her a video of her meeting a man in a hotel room. Krystle admits to having the affair but says it is over now and that is why she went there, to break it off. Dominique blackmails her, she is inviting Vanessa to live in the manner and Krystle is going to welcome her, or Dominique is going to Blake with the video. Krystle says fine.

Blake is with Adam, he tells him that he wants him to move back in the manor. Blake asks if he knows about Jeff’s illness, he has a degenerative condition caused by when he tried to poison him. Blake goes on to say that Jeff is days away from having his offer to buy Carrington Atlantic accepted, he can make them aware of his illness. Blake says that he thinks Jeff is blackmailing the current CEO of CAA. He wants Adam to get the blackmail so they can be on an even playing field, and once he gets CAA they can run the family dynasty together. Adam takes a drink that Blake offers and says he can do it the next night with Jeff is out.

Jeff is with Alexis, she tells him not to worry. If Blake was up to something, she would know about it.

Krystle meets with her man for hire again, she is paying him to put a device under Alexis’ car to kill her and make it look like a faulty gas engine. She tells him to be careful of Dominique and tells him that she videotaped them the other day. He tells her he is done, he is not risking going to jail for her. She offers him double the money, he won’t accept.

Fallon gets dressed up in her sexiest outfit to surprise Liam and she is surprised when he shows up at home with Heidi from his high school study abroad program. Then Connor walks in, Liam’s son.

Fallon puts on a robe and everyone sits down on the couch, she asks Heidi how much would it take for her to go back where she came from. Heidi insists that she is only there because Connor wanted to meet his father. Fallon says that they don’t even really know if Connor is Liam’s son. Heidi apologizes and leaves. Liam tells Fallon that he should spend a little time with Connor, they are only there for a few days.

Sam, Fallon, and Alexis are at the bar, Fallon can’t believe the two of them are planning her engagement party without her. Then Fallon lets spill about Connor. She lets out all her frustration on the two of them, Liam walks in, tells her that Heidi is stuck at a meeting, he will be delayed for a few hours to watch Connor. Fallon meets the two upstairs, she has games brought up and wants to play with the two of them, anyway, she can spend time with Liam. In the end, Fallon has fun, and so do Liam and Connor.

Krystle is determined to get rid of Alexis, if she has done it alone, she will do it herself.

Blake calls Alexis for a meeting. He tells her that he wants her as far away from that engagement party as possible. And if it goes anywhere near there, he just might be forced to tell the cops who killed Mark Jennings. Alexis says she is not going to sit there and listen to his threats, she gets up and leaves.

Heidi arrives to pick up Connor, she tells Liam that she is considering taking a job offer in the city and moving there. Liam invites Heidi to the engagement party.

Adam is trying to copy files from Jeff’s computer when Alexis walks in, she asks him what is going on, he says nothing. He then says he knows about Jeff’s illness, and obviously she doesn’t trust him, maybe he chooses the wrong side.

Michael goes to see Fallon and tries to get her to sign Vanessa. Fallon says that she will let Vanessa sing at her engagement party.

Fallon arrives at her engagement party, Liam is already there and the first thing he asks is if she has seen Connor or Heidi. Krystle comes in and says she is very happy for her and sorry that she hasn’t been kinder to her. Fallon says Alexis has actually been less awful than her lately.

Blake tells Krystle that he warned Alexis to stay away, she is not going to show up at the party. Krystle is upset, she had plans for Alexis tonight.

Fallon sets up a job interview for Heidi in LA. Adam got the proof for Blake, he wants something in return, his seat on the board of directors at Atlanta General. Blake says he is proud of him, and he will make a phone call.

Liam finds out that Fallon got a job offer for Heidi in LA, and he is not happy about it. Liam asks her if she is jealous of a ten-year-old.

Krystle foes to see Alexis, and tells her that she should be at the party, Fallon for some reason still likes her and she wants Fallon happy. Alexis takes the bait, she is going to get dressed.

All of a sudden, everyone in the party gets a video shared to their phones, it is a sex tape of Michael and Dominique. Vanessa is upset, Michael tells Dominique she should be arrested. Well, at least Dominique’s vision of a reality show will come to life with this dirt.

Adam ended up stabbing Blake in the back, he is on Alexis and Jeff’s side, but still got his new seat on the board.

Fallon tells Sam it is the worst engagement party ever, Liam is not talking to her and now the sex tape.

Fallon goes to see Liam and apologizes to him, all of a sudden he had this new family and she started to worry that she wouldn’t fit in anymore. He appreciates the apology, but he is not sure he can do this, be a father. He has tried to play it cool, but he never wanted kids.

In the garage, Krystle has the bomb being put under the car. Fallon takes the mic and both she and Liam speak to their guests just as an explosion goes off in the garage.

Adam admits to trying to kill Jeff, at the request of his father, Blake. Jeff tells Alexis and Adam that it is just a matter of time, and CA is theirs. Liam and Fallon arrive home, Connor is outside the door, he says his mother left him there and said he should wait for him. Inside the house, there is a note, Heidi tells Liam that it is his time to be a father now.