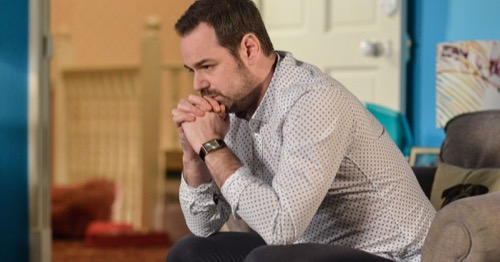 Eastenders spoilers reveal Michael “Mick” Carter (Danny Dyer) could reach his breaking point. For months, he has dealt with Linda Carter’s (Kellie Bright) drinking and bad behavior. She has even physically lashed out at him and put their son in terrible danger. Could the stress and his anxiety prove to be too much during the 35th-anniversary episode? Bright said that her character gets wet so does he shove her off the boat?

Linda Carter’s Alcohol Storyline – For the past few months, fans have watched as Linda’s behavior has gone from bad to worse. She is great when she is sober. However, Linda can’t handle her drinking and it has led to some horrible decisions. She has even lashed out physically at her husband, who has done nothing but tried to protect her.

Putting Ollie Carter in Danger – Eastenders spoilers previously teased that Linda would put her own son, Ollie (Harry Farr) in danger. Social services are already involved and Mick continues doing what he does — protecting his wife and family.

However, there comes a time when it will prove to be too much. We have already seen hints of that when he told her that Ollie would be better off without her.

Eastenders Spoilers: Mick Carter’s Breaking Point? – It is teased that Mick might end up reaching his breaking point. We have already seen him curl up on the floor in a fetal position during a panic attack. He is also under incredible pressure and stress. Everyone has their breaking point and it seems inevitable that Mick will reach his. Could this happen during the boat party when the 35th-anniversary special airs?

Kellie Bright Confirms She ‘Gets Wet’ – On Good Morning Britain, Kellie Bright confirmed that Linda “gets wet.” This has fans speculating on how she ends up in the water. We already know from video screenshots that she will get drunk once again. Could Mick end up losing control and push her off the boat? Fans will have to stay tuned to find out.

Eastenders airs the 35th-anniversary episodes during the week of February 17.