Eastenders Spoilers: Mick Tells Linda Their Son Would Be Better Off Without Her 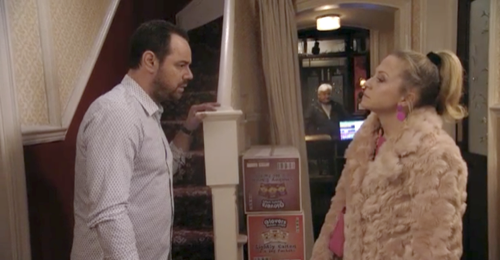 Eastenders spoilers reveal Michael “Mick” Carter (Danny Dyer) makes a harsh statement to his wife that he instantly regrets. He is tired of her drunken escapades, which is the whole reason they have to deal with the social worker, to begin with. Mick tells Linda Carter (Kellie Bright) that their son would be better off without her. Before he can apologize, he runs out. Will his statement send her spiraling downward even further?

Linda Carter’s Drinking – For the past few months, Linda’s drinking has gotten out of control. Perhaps the most shocking behavior came on New Year’s Eve. A lot of shocking and terrible events happened that night and Linda doesn’t even remember some of it. Things will continue to get worse for the mother, who is not only battling an alcohol addiction but is in a battle for her son, marriage and perhaps even her life.

Social Worker Visits – Linda’s drinking has caused so many problems for the family already. It is even affecting her son, Ollie Carter (Harry Farr). The school brought up concerns about his emotional well-being due to his chaotic home life. Of course, Mick was horrified that he could smell alcohol on Linda’s breath when they had the meeting at the school.

Eventually, a social worker was assigned to the case and she comes out to the house again. This time, Linda is present but sneaks gin in her tea to deal with the overwhelming stress.

Eastenders Spoilers: Mick Carter’s Harsh Words – After Linda chases the social worker down the street in a drunken stupor, she realizes that she really made a mess of things. It might be too late to fix it, too. Mick is just fed up with trying to protect her and tells her that Ollie would be better off without her. Heartbroken, devastated and angry, Linda storms out of the house before Mick can apologize.

It’s Not the End of the Carter Marriage Just Yet – It was previously teased by actress Kellie Bright that Linda might lose her family before she gets sober. However, the 35th anniversary of the soap will feature Mick and Linda trying to repair their relationship. They decide to have a boat party and invite some other families. However, secrets will be unearthed, truths will be told and there will even be death. It seems like this situation is going to go from bad to worse.